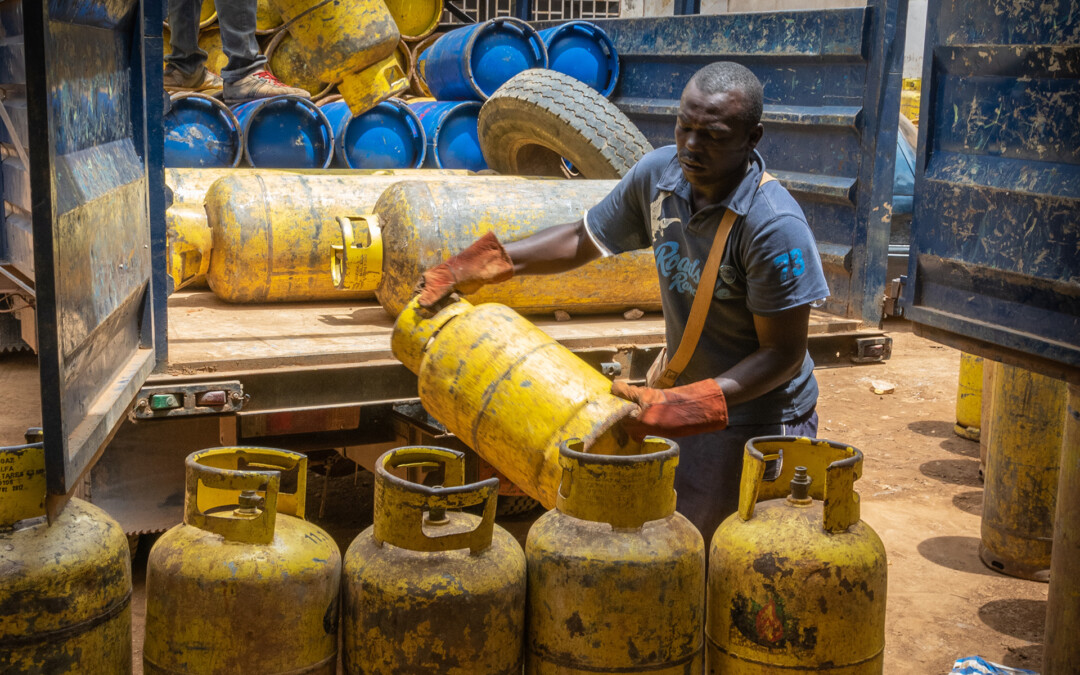 This Kenyan woman lives in a village near Eldoret in Uasin Gishu county, and has just started to prepare a meal on her liquefied petroleum gas (LPG) stove. For a rural area, she is an early adopter of LPG in the home. Hers is a single-burner ‘meko’ type stove that is fixed directly to the gas cylinder. She likes using LPG very much because it is quick and easy to use, and is clean – there is no smoke and her pots are not blackened. 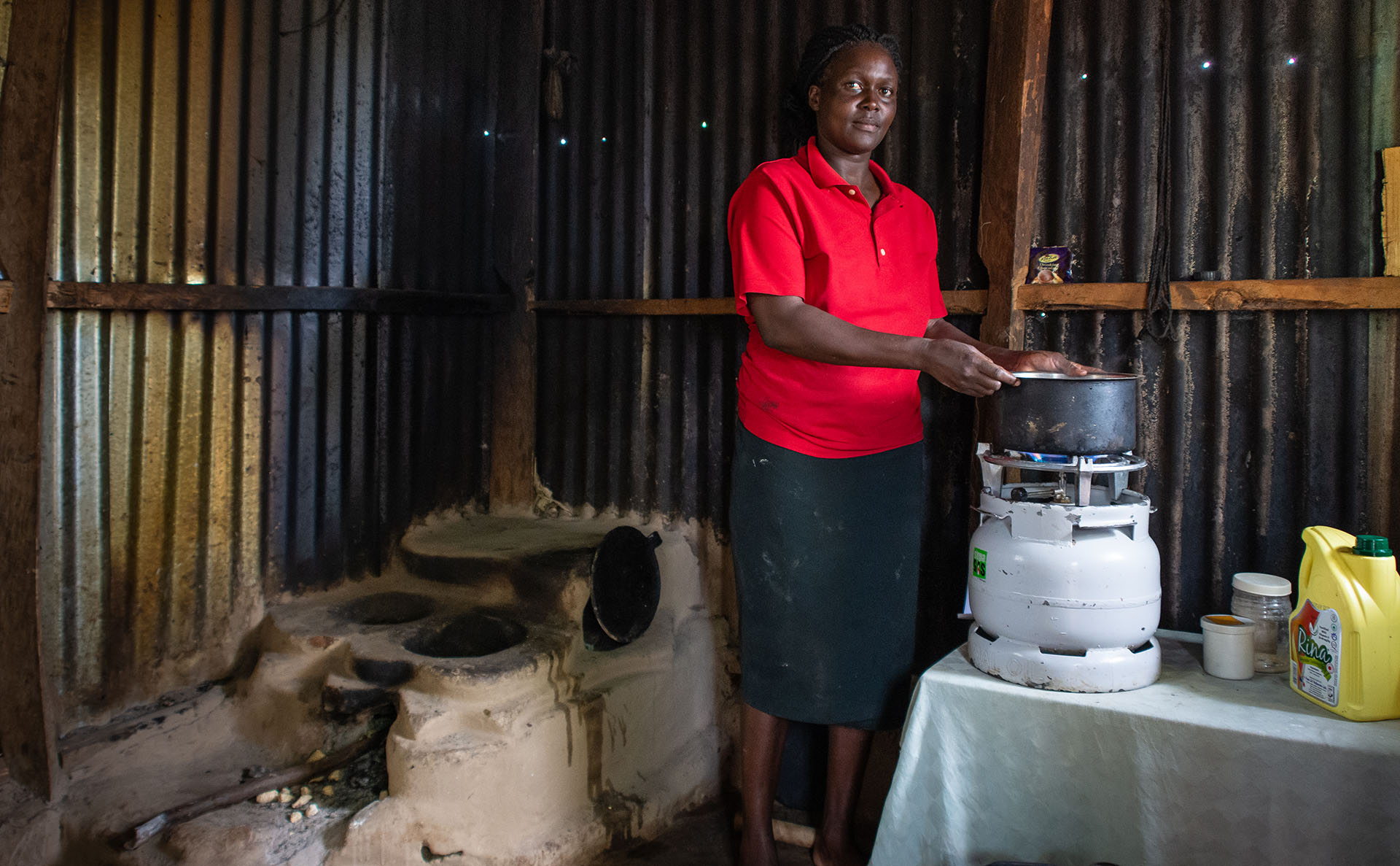 This rural household near Eldoret in Kenya has made the first steps in transition to clean fuel with a one-burner LPG stove, but the traditional wood stove in the corner is still used regularly so kitchen air pollution levels are still far too high.

But behind her in the corner of the kitchen is a traditional wood stove with that she also uses regularly. This mixed use of clean and solid fuel (known as ‘stacking’) is common, and will result in the cook and other members of the family still being exposed to health-damaging levels of household air pollution (HAP). Across developing countries, three billion people still rely on solid fuels and kerosene; WHO estimates that the resulting air pollution causes almost 4 million premature deaths each year. Many African governments, including that of Kenya, are committed to majority clean fuel use by 2030 or soon after, but the pace of change is far too slow.

Why is this? And what is needed to speed up the switch to modern, clean, and efficient energy? The reasons that this woman and many others like her across Africa give for not adopting or using a clean fuel such as LPG exclusively include a mix of economic, practical, and cultural factors.

Barriers to adoption and use of LPG in the home

The initial expense of the LPG appliances is relatively high, and without financial assistance can be prohibitive for many poorer homes. The household then has to cover the cost of cylinder refills every few weeks, depending on how much they need for cooking, heating water and other uses. For households that collect wood or other biomass from the forests without payment, the cost of cylinder refills may seem expensive. But if they are already buying wood, charcoal, or kerosene, they may find that LPG costs no more – and may in fact be cheaper. Many do not realise this, and just assume LPG is more expensive.

Households with low and irregular incomes can struggle to find the relatively large outlay needed for a 6 kg or 12 kg cylinder refill without some form of financial assistance. Help may be on the way, however. For example, innovative new ‘pay as you go’ (PAYG) LPG technology has been developed which uses a ‘smart meter’ on the cylinder linked to the service provider via the mobile phone network. These systems allow users to receive a full cylinder, but purchase only the amount of fuel they need for the next day or few days. A number of such PAYG programmes are now being tested in Kenya and Tanzania, and if the early acceptance and success are confirmed on a wider scale, may accelerate LPG access for millions of households. 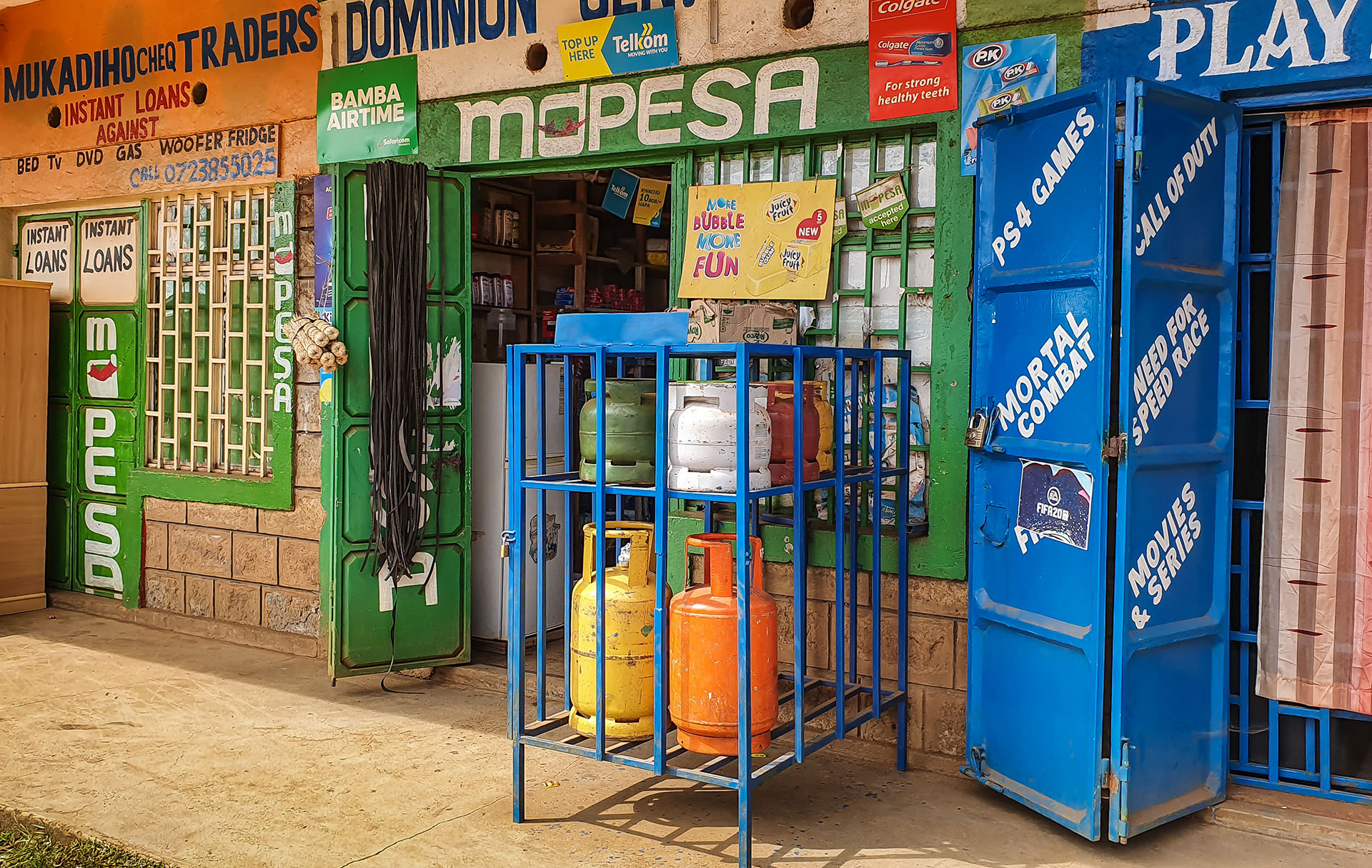 The mobile money system (mPesa) in Kenya can facilitate the purchase of LPG refills, particularly if linked to a ‘pay as you go’ system

Poor availability and supply of LPG is another potentially important barrier to adoption and use. People will revert to their previous fuels if LPG is difficult or impossible to obtain when their cylinders are empty, or if the retail points are too far away from their homes. So, it is vital that the LPG market in a country has sufficient infrastructure to produce and/or import LPG, store, distribute and sell it, and that there are sufficient cylinders in circulation to ensure these are always available when customers need them. 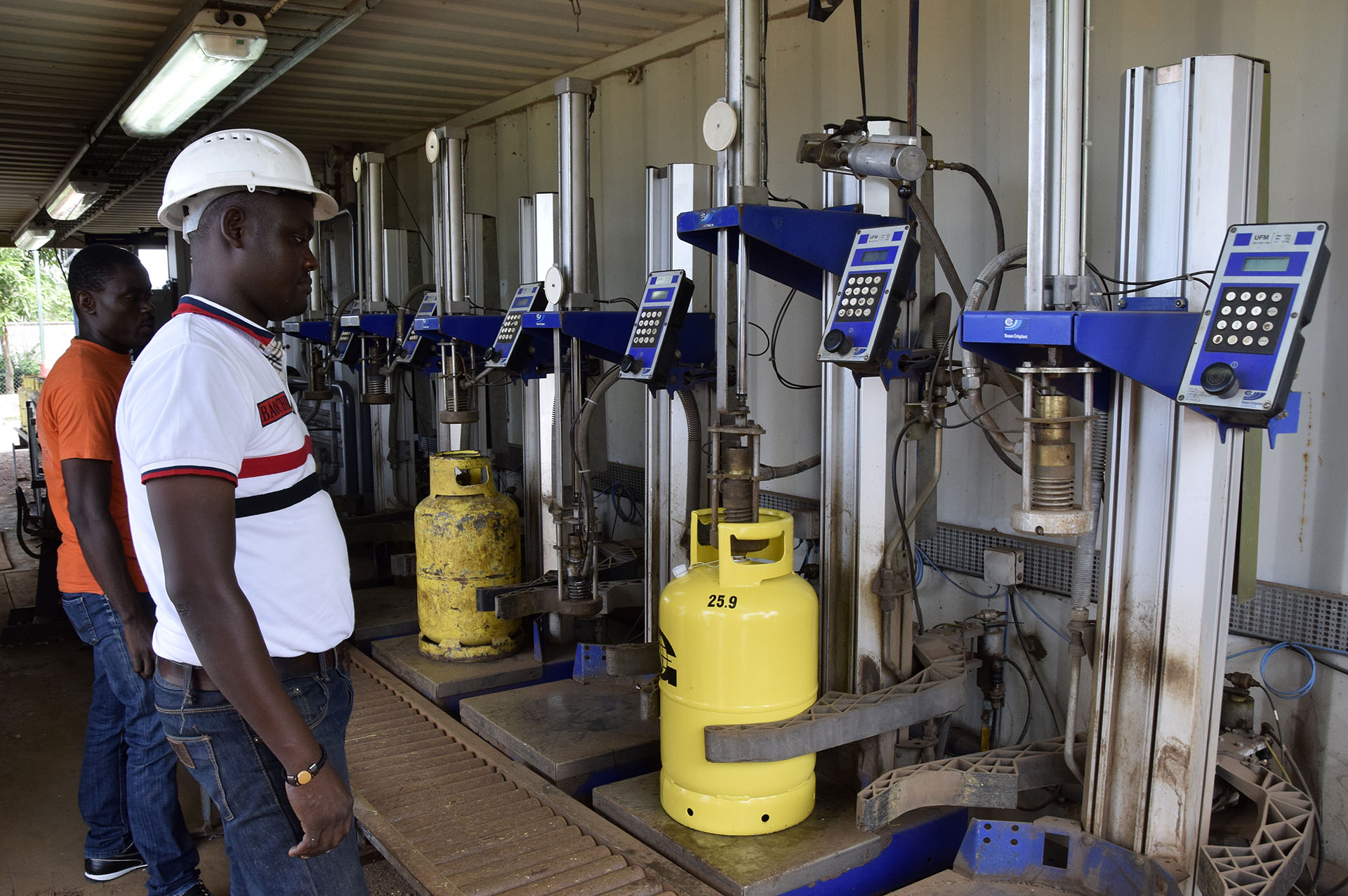 Some people say they prefer the taste of food cooked using the traditional methods on a wood fire. This is something we can all recognise, but at the same time we know that those habitually using clean fuels in both developed and developing countries do find ways to ensure that food tastes the way they like it.

The Kenyan woman in the photo at the start of this article was not afraid of LPG fires or explosions, but this fear is not uncommon in developing countries. Although such events are comparatively rare, when they do occur, they attract considerable media attention; this understandably discourages people from switching to LPG. So long as the market is correctly organised and regulated, however, LPG is a very safe fuel.

The key to ensuring a safe LPG market is the so-called ‘cylinder recirculation model’, whereby marketing companies own the cylinders. When the customer needs a refill, they exchange the empty cylinder for a full one that has been checked by the marketer who is responsible for its safety. Once this system is in place across a country, and regulated to ensure compliance, the public can feel much more confident about using LPG. It is also important to educate households on how to use LPG safely in the home, including checking for leaks.

A Chinese proverb tells us that “the best time to plant a tree is 20 years ago; the second best time is now”. The stark inequity in access to and use of clean household energy that still exists across the world today requires that the international community think and act with the same sense of urgency.

Almost 35 years ago, the late Professor Kirk Smith brought this problem to the attention of the world with his landmark review ‘Biofuels, Air Pollution and Health‘. Seven years ago, Kirk and I helped co-ordinate an expert group convened by the World Health Organization to prepare Indoor Air Quality Guidelines on Household Fuel Combustion (2014). After extensive reviews of evidence on exposure levels and health risks, these Guidelines concluded that the only way to secure the full health benefits of cleaner air for the billions of people worldwide still reliant on solid household fuels and kerosene, was to prioritise clean forms energy.

LPG, electricity (however generated, but especially through non-polluting sources), biogas and ethanol, along with natural gas where available, can all contribute to meeting household needs for clean energy. Among these energy sources, however, LPG currently offers the best combination of immediate availability, convenience, and affordability. Furthermore, it is abundant (and likely to remain so for the foreseeable future), popular as a cooking fuel choice, and very practical in terms of transport and storage. LPG therefore offers to best option for making rapid and substantial progress towards the targets for clean fuel use in African homes, set by many of the continent’s governments.

The SDG target year of 2030 is now only eight years away, and Africa is not currently on track to meet its energy related targets, including Target 7.1: By 2030, ensure universal access to affordable, reliable and modern energy services.  For this to change, given current trends in clean fuel adoption and the rapidly expanding population across the continent, there needs to be well-planned investment in LPG and other clean household fuels, and quickly. 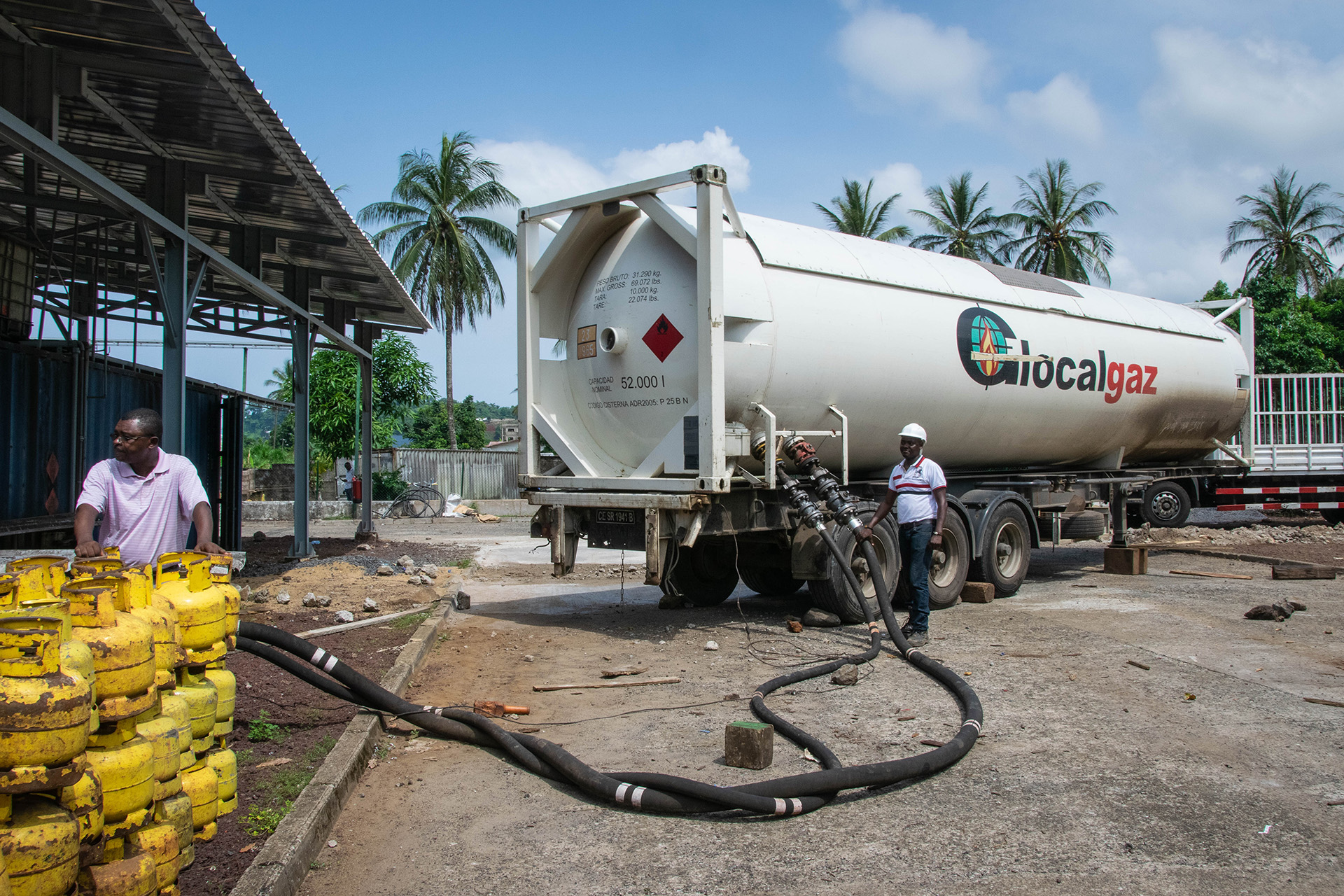 Investment in expanding LPG markets to improve access to this clean fuel across Africa is being held back by concerns in wealthy countries over LPG being a fossil fuel, even though research evidence shows the adverse environmental impacts of large scale adoption in sub-Saharan Africa would be negligible (see text).

In recent years, among wealthy donor countries and their development institutions, there has been reluctance to promote and invest in LPG because it is a fossil fuel. But the evidence does not support this concern when it is going to be used as a clean alternative to biomass in poor countries such as those of Sub-Saharan Africa. Comparative impact studies show that switching populations dependent on biomass to LPG would have minimal effects on climate warming and will protect forests.

Restriction of carbon emissions to keep the temperature rise below 1.5 degrees Centigrade is an urgent priority. But if any population group has a right to the now limited carbon budget the world can afford, it is the poorest people across Africa and other developing countries whose daily lives are still dependent on inefficient, polluting and dangerous household fuels that already contribute to climate forcing through products of incomplete combustion (e.g. methane, black carbon) and depletion of forest resources.

As a fuel, LPG also has encouraging prospects for renewability. There is growing interest in BioLPG which, as it is chemically the same as fossil-derived LPG, can simply be fed into existing infrastructure, bottles and stoves. Although it will be some years before BioLPG can meet demand, over time it will likely become an important renewable option for clean cooking. Fossil-derived LPG can serve as the best short- to medium-term solution, but over time displaced by BioLPG and other renewable fuels as these become available and affordable at the scale required.

It is (or was) encouraging that precisely this strategy appeared last year in UK government guidance on LPG as a clean cooking and heating fuel in developing countries. This report, Aligning UK international support for the clean energy transition – Guidance, March 2021, states (page 9), “LPG has a key role to play in providing access to clean cooking and heating, given its time saving and health advantages and relatively low emissions when compared with solid biomass, coal and oil, until the transition to renewable fuels is feasible.”

That is realistic, but it remains to be seen how the UK Department for Business, Energy and Industrial Strategy (BEIS) applies this guidance in practice. Norad, The Norwegian Agency for Development Cooperation, has also been looking at the role LPG could play in the clean energy transition for developing countries, commissioning a report (Title: Study on the Potential of Increased Use of LPG for Cooking in Developing Countries) and holding webinar on the topic in January 2021. As far as this author can determine, including via direct contact with Norad, no concrete action has been taken following these initiatives.

Such action could be very important, however, because development finance from respected agencies such as the UK Government, Norad, the World Bank and others, linked to technical support, has the potential to help create the conditions for safe and effective LPG market growth. This, in turn, can attract the (generally much larger) private investment required to meet the demand for clean household fuel from a rapidly growing African population.

Efficient, clean, and safe energy in the home will contribute to achieving other SDGs and thereby help to secure a wide range of health and development benefits. Now is the time to support governments across Africa and in other developing countries by investing in LPG, a fuel which is available and abundant, widely regarded by the populations concerned as aspirational and convenient, will have minimal adverse environmental impacts at the scale required, and can in due course be substituted by renewable alternatives.