Cycling up the legendary Mt Ventoux three times in one day in your sixties may seem ambitious, unwise even. But with adequate preparation it can be enjoyable and very rewarding.

The observatory tower stood, brilliant white against a deep indigo sky, drawing me up the twists and turns of the road, past the Tom Simpson memorial to the summit of Mont Ventoux for the third and last time today. One final effort around that last hairpin, and we were there. We had joined the Cinglés, the club of crazy people. 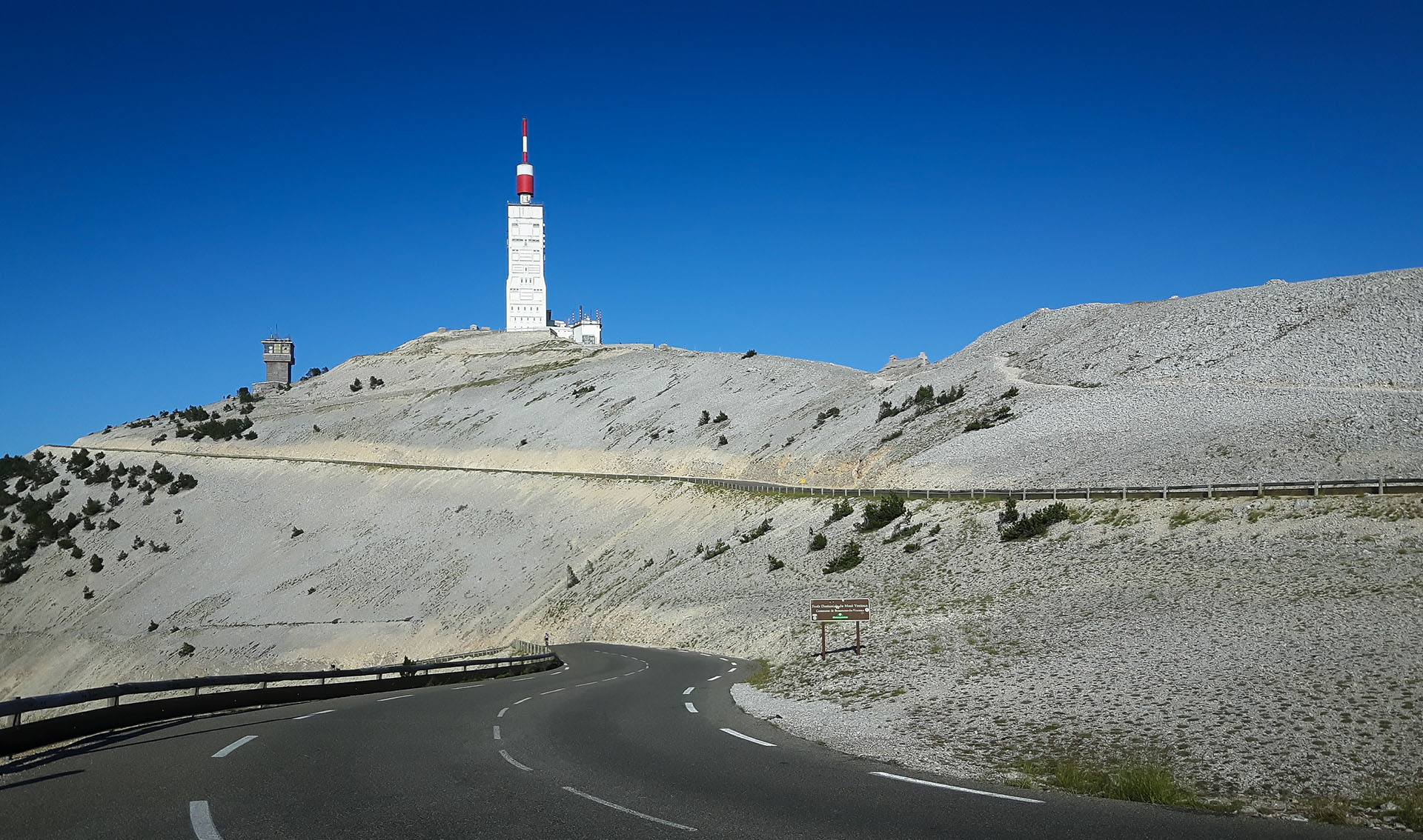 Some eleven hours earlier, at 4.30 am on a cool July morning, my brother-in-law David and I had stepped from The Blueberry – our modest but friendly hotel in Malaucène – half-asleep and not a little anxious, to start our attempt to ride all three of Mt Ventoux’s road climbs in one day, some 4,500 metres of ascent over 140 km.

David, a professional musician, had recently turned 60 and announced, “I want a challenge, a new bike, and to give something back.”

We certainly had our challenge and David had his bike – a Reilly titanium frame, with a mountain-bike range of gears. The ‘giving back’ was fundraising for Brass for Africa, a small, innovative charity David had links to that uses music to empower poor and disabled children in Uganda and Liberia.

So it was that, in the faint pre-dawn light, lost in our own private worlds of excited anticipation and admittedly fragile self-confidence, we began the first 21 km, 1600 metre climb, settling into what we hoped would be a sustainable pace. 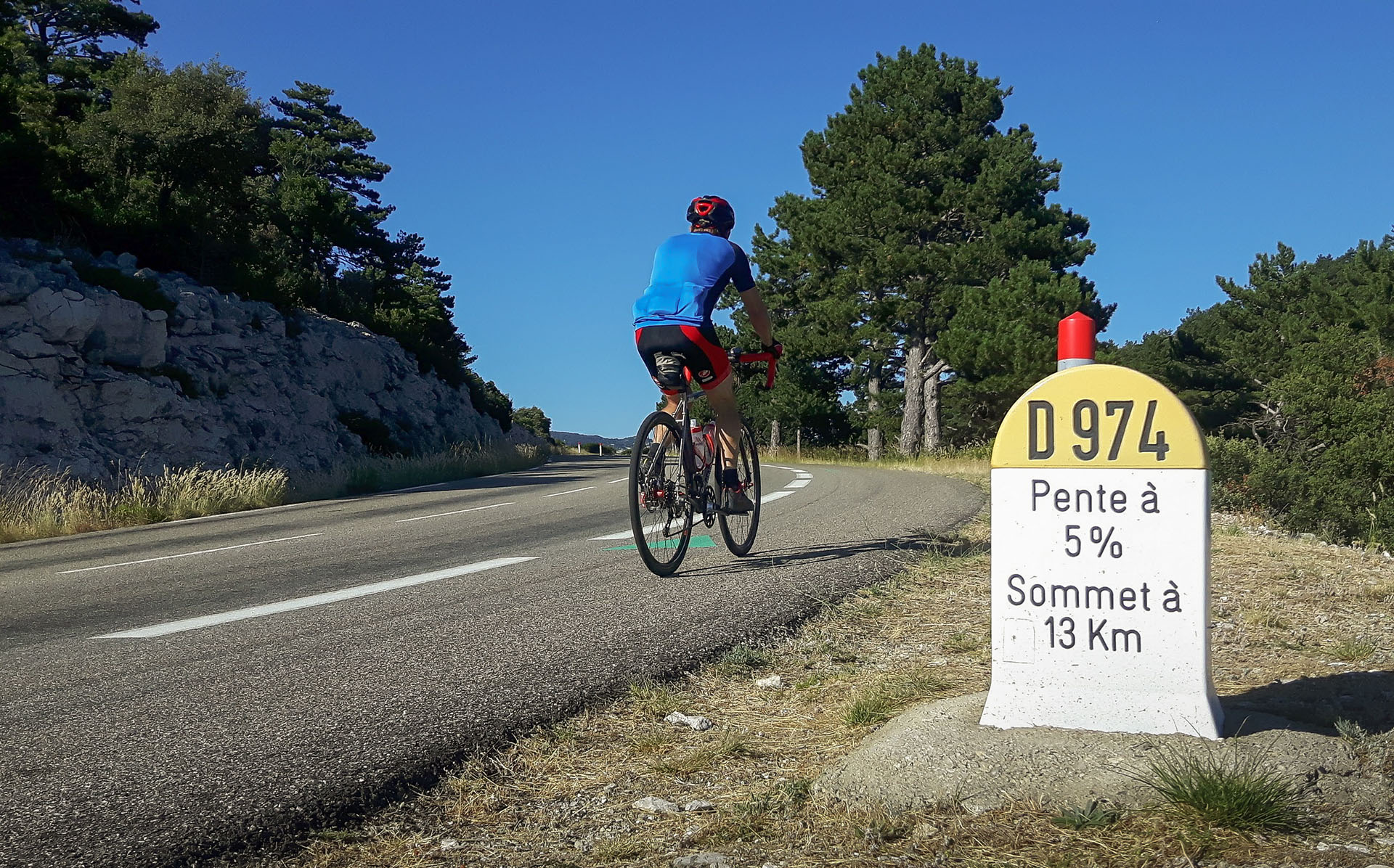 Three years older than David, I had for some time been taking an active interest in how ageing affects a cyclist’s ambitions.

In January 2019, Cycling Weekly reviewed the effects of training in older age on aerobic capacity and muscle mass, concluding that ‘while … a reduction in performance as you age is inevitable, … your training practices can have a significant impact on that process’. Recent scientific studies have also found that regular cycling in older age can help keep the immune system ‘young’.

Building on this encouraging evidence, a growing number of organisations offer encouragement and practical advice to older cyclists through articles such as ‘Cycling through the ages: cycling in your 50s, 60s and beyond’, available through British Cycling.

The next few hours would see whether our training efforts had been sufficient.

When it came, just below the summit, the sunrise lit up a vast landscape reaching across countless ridges and hazy blue valleys to the distant, snow-capped Alps, almost one hundred kilometres away to the east. 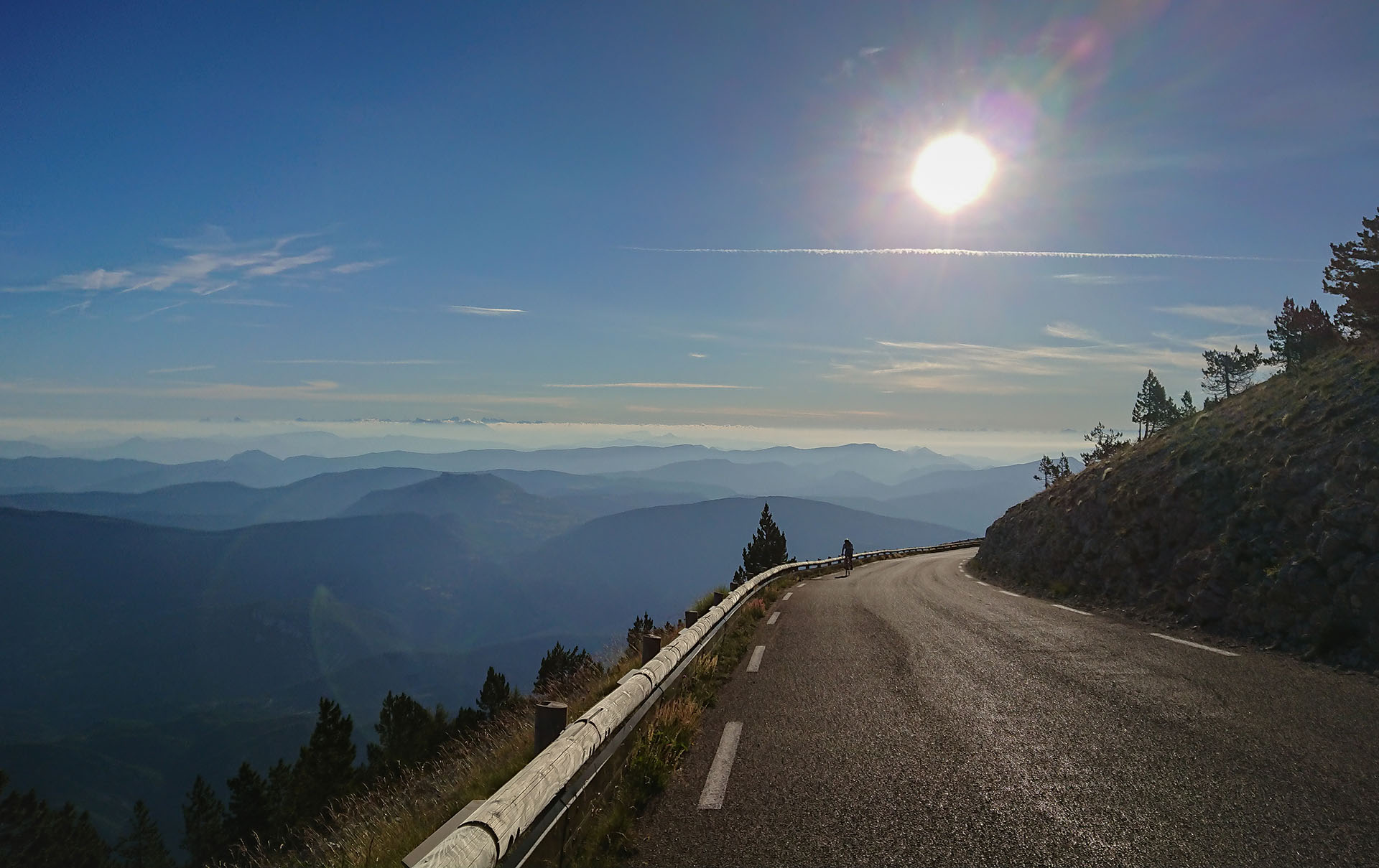 Sunrise on the Malaucène climb

With our carnets stamped, there followed smiles, photos and exclamations of “one down, two to go … including the hardest!” So far, we were slow, but steady. If it stayed like this, then maybe we could do it.

Now for the exhilarating descent to Bédoin. Despite the sun and extra layers, cold began to creep in, and with it, a tiredness that sapped our mental and physical reserves. Ensconced in a café in the pretty tree-lined main street of the village, we both felt a bit shell-shocked. Glancing back up at the mountain, I anxiously asked David how he was feeling.

“Cold and horrible”, he replied. “And if it’s like this now, how will I be at the top?” He had taken the words out of my mouth.

Fortunately, the first few kilometres out of Bédoin are kind, as the road climbs gently past vineyards and pretty, Provençale farmsteads until the village of St Estève. Here a sharp bend, once steeply banked from the days of the Mt Ventoux Hill Climb motor race, marks the start of the hard work.

The Bédoin forest is an unrelenting climb of ten kilometres between St Estève and the respite of Chalet Reynard. With an average gradient of 10 – 11%, it is not just the steepness that gives this famous Tour de France ascent its particularly challenging character, for the road lacks features such as hairpins which break the monotony of many big climbs.

The temperature was already well above 30 degrees Centigrade and it felt quite airless under the canopy of trees. Sure enough, a couple of kilometres into that endless forest, the mind-games started. Back and forth, my thoughts and emotions ranged between moments of pernicious self-doubt and that I really was too old for this, through admonitions to breathe steadily and focus on my rhythm, to moments of resolute determination, then back …. I counted down those white and yellow kilometre posts which innocently announce what lies ahead; D974, 13 km to summit, 11% average gradient. A hundred metres or so past the post I could reassure myself that it was only a few more minutes to the next one, where I would drink, eat an energy bar, and press on.  Gradually, I gained the upper hand and the forest released me from its grasp.

With the pressure off a little, I took in my surroundings. Through eyes stinging with salty sweat I observed the other cyclists. Most were young, with bean-pole physiques, who sped past me no doubt chasing Strava segment glory or dreams of a place in a professional team. Relatively few were of our age and most, but by no means all, were on e-bikes. 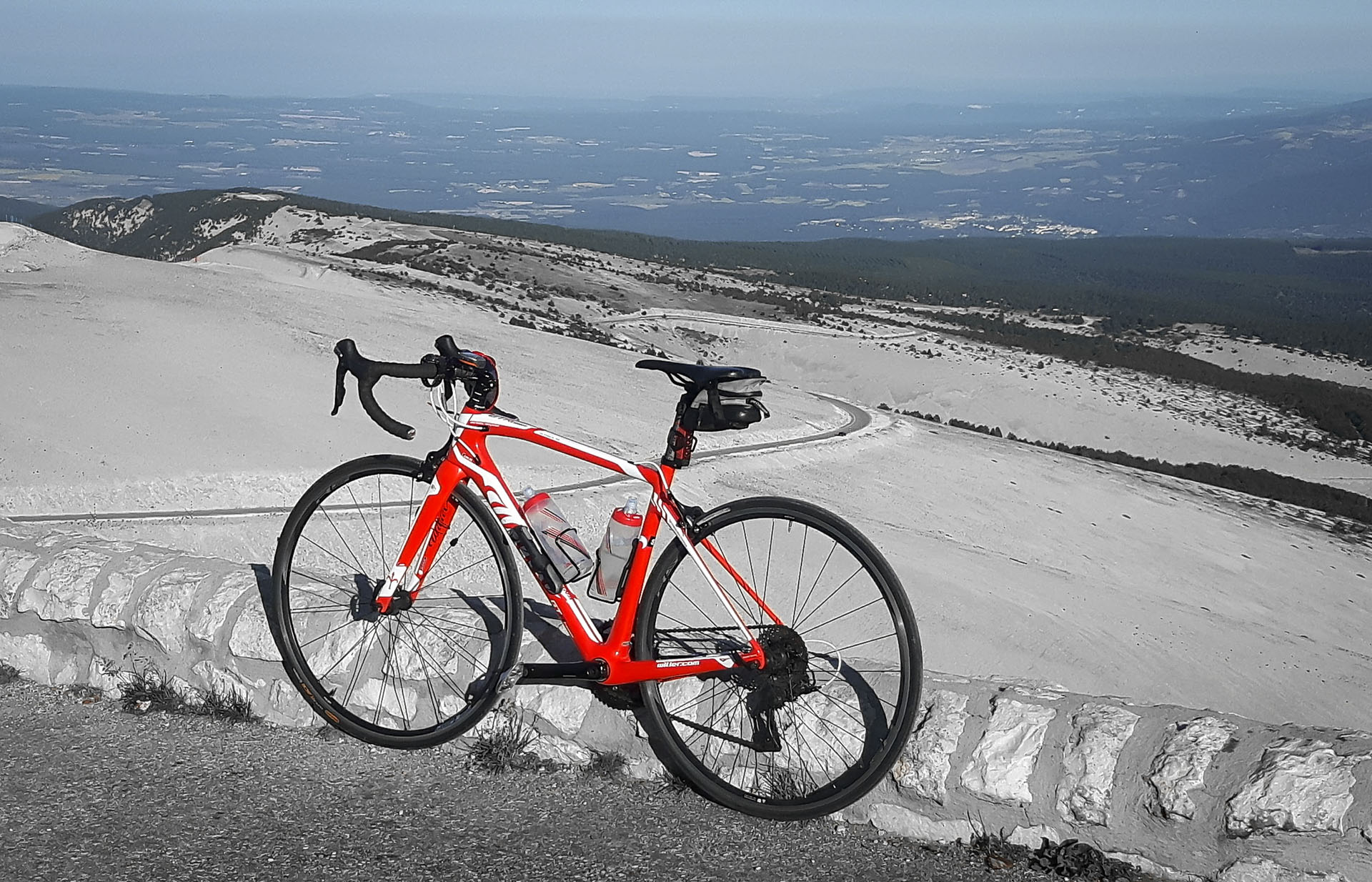 The shimmering, desolate limestone landscape above Chalet Reynard was a relief from the closed-in world of the forest. I love this section for its wild, open nature, the distant tower that hangs above the road and the views that extend forever, south across the Vaucluse plateau and the long range of the Luberon. Soon we had completed our second ascent and with the carnet stamped again, the two hardest climbs done, our confidence was creeping back.

The descent to Sault took us through forests we could now enjoy. With glimpses of the wild Plateau d’Albion where France once based its nuclear missiles, we ran out through fields of purple lavender, the warm air rich with its sweet aromatic scent. Waves of fatigue began to sweep over me, and I could feel myself falling asleep on the bike. I had to force myself to stop, get off, eat and drink. 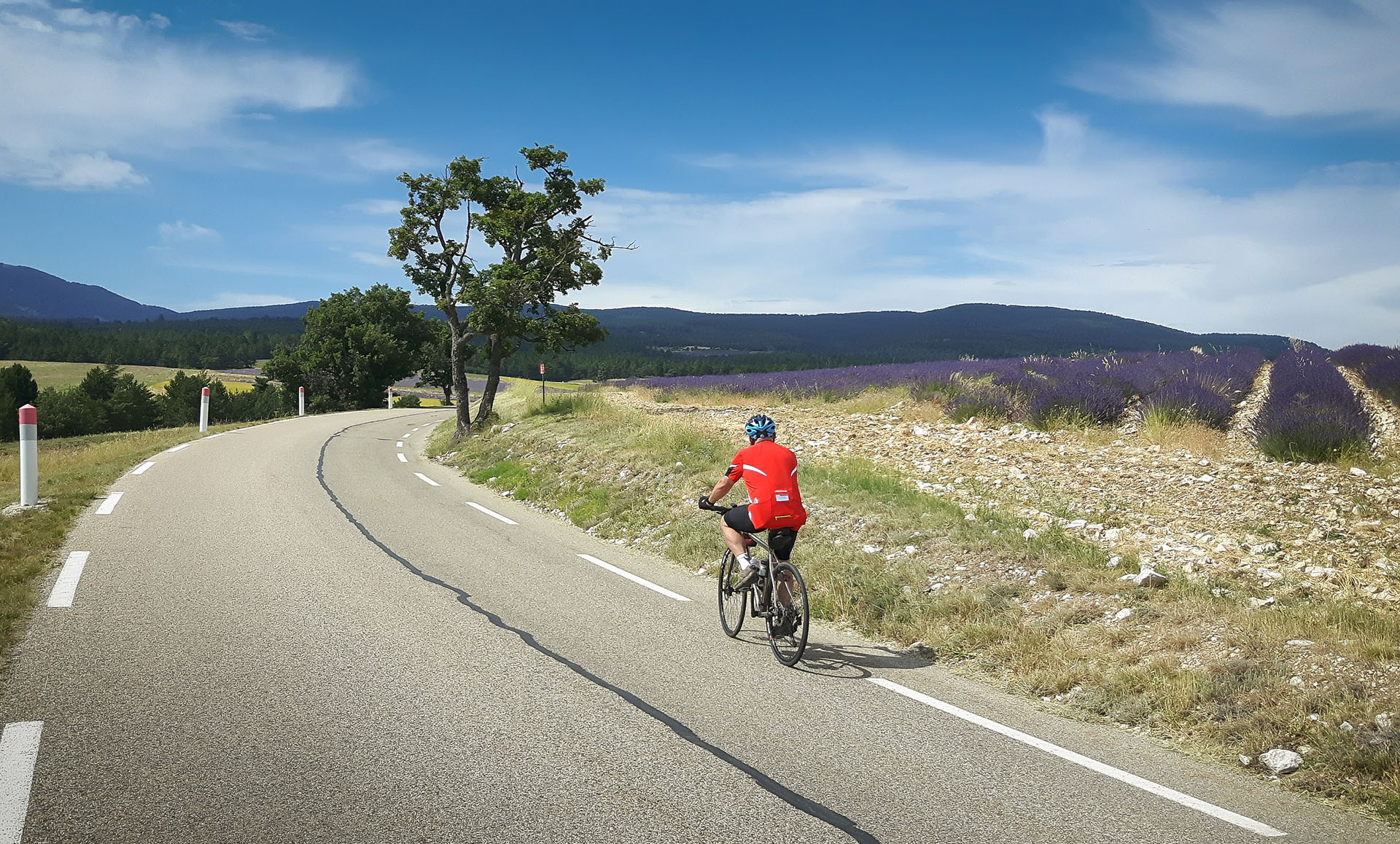 In Sault, after stamping the carnet in the tourist office, we sought out steak, frites and coffee. It did the trick, too, for I felt comfortable and with enough reserves on that last 1,200 metre 26 km climb back up our mountain.

The ride from Sault is the easiest, which is why we left it till last, and perhaps it is also the prettiest. After a brief, final refreshment stop at Chalet Reynard, we set off on that last 6 km to the summit. A gentle, warm wind accompanied us, but on other days the Mistral can howl across these barren slopes and the aptly named Col des Tempêtes at 200 kilometres per hour, making cycling impossible.

“Is that it?”, David asked rhetorically, admitting to some sadness that it was over. 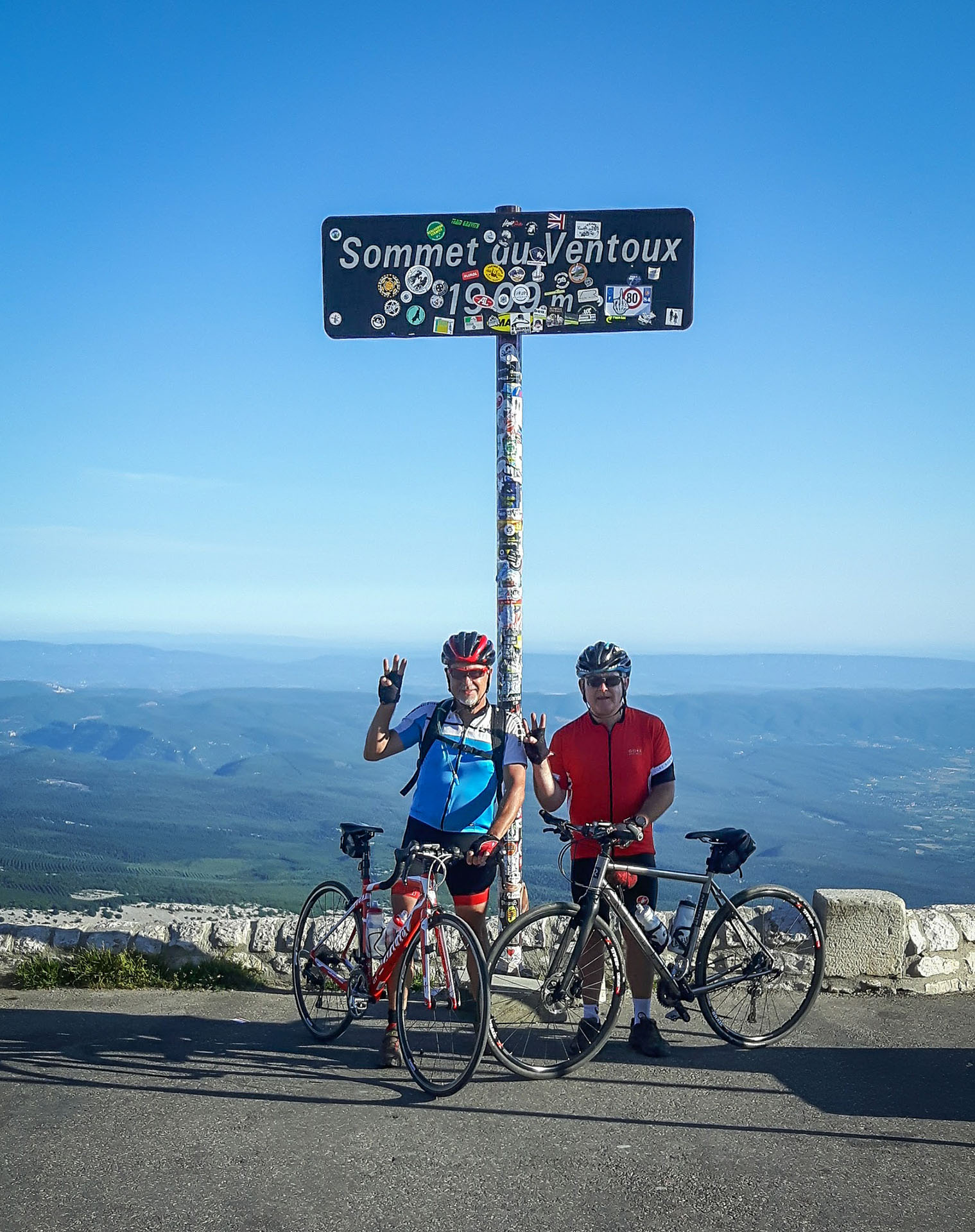 Celebrating our third and final ascent, and joining the Crazy Club

It was with my own mixed emotions that I set off on the 21 km descent to Malaucène. Relaxed now, we could immerse ourselves in the enjoyment of this last section of our Cinglés ride, for it is like coming into land in a plane – though with the wind in your hair.

Mont Ventoux towers above everything around it, so on the top you feel you are flying and all the features below – many of which are themselves substantial mountains – are compressed and the shadowed tones are dark and flattened. As you descend, the forms of hills, ridges and crags emerge, then surround you, and finally loom above.

The vast panorama of the Drome to the north of Mt Ventoux, with the snow-capped Alps in the distance to the north-east

Below the high montane region and forests of oak and pine, box is the dominant shrub. Often these have been trimmed into neat shapes, and their slightly bitter scent accompanies the cyclist twisting and turning through the innumerable bends.

With relief that my Garmin battery was still running, we touched down in the bustling, welcoming centre of Malaucène, the only question being which bar to head for. The cold beers we had been fantasising about for many hours were finally real.

Time to reflect, and maybe to plan. It had taken 12 hours in the saddle, slow to be sure, but neither of us had been close to giving up, the landscape and views were stunning, and the cycling – with the possible exception of the Bédoin forest – had been among the most enjoyable we could remember.

We had joined the Club and enjoyed it. My 70th birthday is a few years away, but with regular training, maybe there are new bikes and many more exhilarating challenges out there waiting for us.

The Club des Cinglés du Mont Ventoux web site provides information on registration (which should be done 2-3 weeks ahead of the ride), on obtaining the carnet, check-point stamps and other practical information:

Some facts about Mont Ventoux

Cycling Weekly: When do cyclists hit peak form? Cycling into your 40s, 50s and beyond.

British Cycling: Cycling through the ages: cycling in your 50’s, 60’s and beyond

David and Nigel drove from London to Mont Ventoux over two days using P&O Ferries, and stayed at The Blueberry, a friendly 2-star hotel in Malaucène for four nights for around £200 in a twin-room.

The closest airports to Malaucène are Avignon (50 km) and Marseilles (109 km), served by several budget airlines.

Bike hire is available from the multiple cycling shops in Malaucène, Bédoin and Sault; Nigel paid 75 Euro for 2-day hire of a Wilier GTR 105 (with compact 50/34 chain set and 11-32 cassette) at Provence Cycles in Malaucène.

Brass for Africa is a small charity that empowers poor and disabled children and young people, many of them orphans, in Uganda and Liberia through brass music.