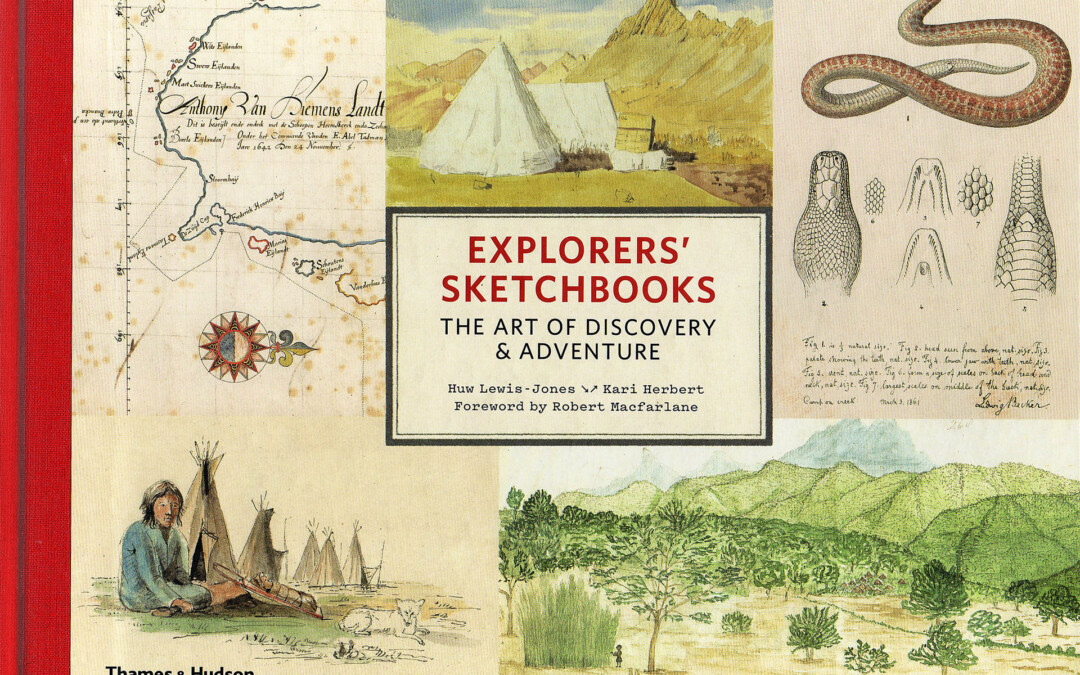 Choosing a favourite explorer-artist from this treasure trove of a book is an almost impossible task, so rich and varied are the stories and images.

One (of many) that stood out for depth of character and achievement was Amelia Edwards (1831-1892). Already a successful novelist by 30 years of age when her parents died, she set out in 1873 to travel through Egypt, where she explored and painted at Abu Simbel.

Concerned about the damage to the monuments caused by previous archaeological work, on her return home she established the Egypt Exploration Fund to support research and conservation. On her death, she endowed a professorial chair in Egyptian Archaeology at University College, London, which remains to this day. The lighter side of her character is also illustrated though humorous and engaging sketches of her encounter with a crocodile. 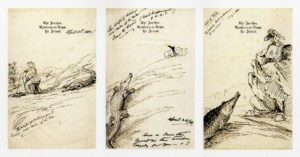 These are just a few highlights from the story of one of the seventy explorers featured. Eleven were women, remarkable considering the period covered ranges from the 17th to the 20th centuries.

In his Foreword, the award-winning mountain and wilderness writer Robert Macfarlane, sets the scene for the sense of discovery and awe that lies in the 320 pages of this extraordinary book. Perhaps most telling is his observation that ‘I had thought myself reasonably familiar with the history of exploration … but in this book Huw Lewis-Jones and Kari Herbert have shown me the considerable limits of my knowledge – and opened up dazzling new horizons and vistas to me’. 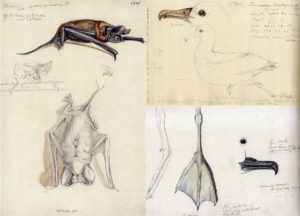 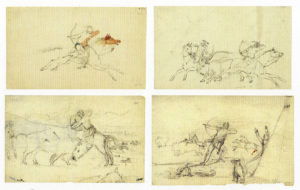 These illustrations by Titian Ramsey Peale (1799-1885) show the very high quality of many of the scientific drawings in the book, and also the variety of topics, here bison hunting in Missouri.Lewis-Jones and Herbert, the latter the daughter of the polar explorer Sir Wally Herbert, point out that before photography and video became available, the artwork and notes in these sketchbooks were the only way to record the new knowledge that came with exploration.

Given the dangers of travel to remote places over the last few hundred years, they also note that ‘within the notebook lies the opportunity to recount a story in case the traveller never made it back alive’. While most survived, quite a few did not return home through violent encounters, disease or misadventure. 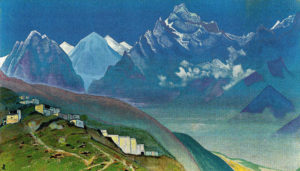 Each of the chapters featuring individual explorers, while necessarily brief, provides sufficient to gain an idea of their background, how they became involved in exploration, their most important travels, and how they expressed themselves through writing and artwork. An overriding impression is of how varied these individual biographies and outputs are, from the employed expedition scientist and artist, to the sometimes wealthy but always independent-minded men and women who just took themselves off to all corners of the world, with the common purpose of recording in words and pictures what they found.

A few of these explorers certainly kept notebooks, but these could hardly be described as sketchbooks. These leaves a sense that it was their fame and importance as explorers that was the primary reason for their inclusion. Their stories are still interesting, but this does leave the reader wondering why they appeared in the book without an artistic contribution on a par with others.

These main features are broken up by observations from ‘a small team of explorers’, asked by the authors to provide insights into the art of discovery, reflecting on what their sketchbooks and journals mean to them, and how the material in the book relates to their own travels. While an interesting device, it is not clear that these contributions add anything substantial to the power and richness of the main subjects’ stories and art. One might perhaps view these essays as bonus tracks on an otherwise brilliant album.

Inspiring and visually stunning, and modestly priced for a hardback with quality reproductions, this book is a gift to treasure and return to again and again.