E-bikes in the mountains: new opportunities or an all-too-easy option? 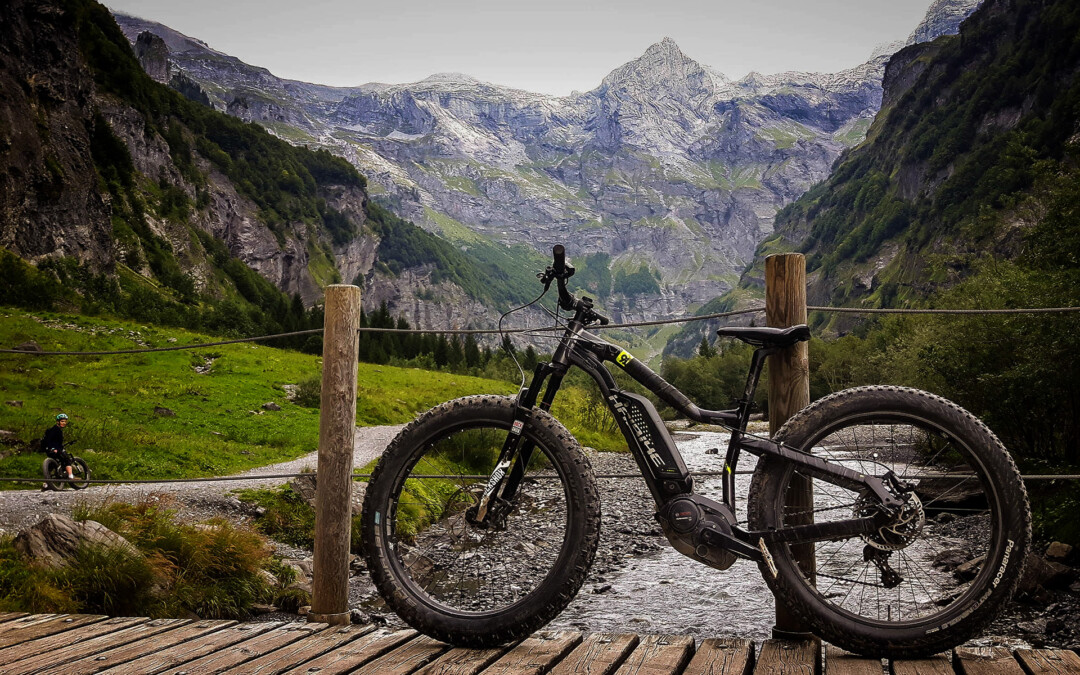 Thomas Moille, the 32-year old co-owner of bike rental business Mountain Spirit in the Alpine village of Samoens, talks enthusiastically of what electric mountain bikes can offer the keen cyclist.

Thomas Moille, who runs Mountain Spirit Sports in Samoens, in the Haute Savoie of France. E-bikes now make up most of the rental business.

“In summer, you can complete a big tour when time is limited, and power up twisting trails, which otherwise you would walk. Très sportif!”, he exclaims, recalling some great rides. “And, in winter, the e-fatbike is perfect for snow, which is very difficult to ride through without assistance”.

According to industry data, e-bike sales grew between 20% and 90% across European countries in 2017. 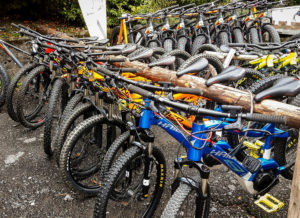 Bike rental is now a big summer business in the Alpine ski resorts, but e-bikes are becoming more and more popular

This trend has caught the attention of travel writers. Some of these stories, however, are not about enhancing active riders’ experiences. Rather, they describe how e-bikes offer visitors opportunities to claim the ‘glory’ of riding famous Tour de France climbs such as Alpe d’Huez, or to explore mountain biking trails in areas such as the Vercors National Park.

What is notable is how these authors, seemingly young and healthy, suggest it would not be possible or enjoyable to take on these challenges without e-assistance, as these are the preserve of ‘ultra-fit’ athletes.

The European Industry report takes a similar line, noting that a growing road e-bike sector ‘brings the public the ability to climb the same mountains as professional racers do in the Giro d’Italia’.

On the face of it, this fits with Thomas’ experience. “Most of our customers are holiday-makers”, he said. “When we take out groups, typically several of the people need the electric assistance; some would not cycle at all if the e-bikes were not available.” 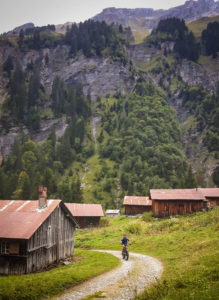 Easy rider – en route to the Refuge des Fonts, though the battery level was getting critical

Is this true? Or have expectations been lowered, encouraged by the availability of an easy alternative? And, if part of a wider trend as sales grow, what are the implications for health, and for enjoyment of challenging physical activity?

Every year, thousands flock to the mountains to ride cols and trails on conventional bikes. One such cyclist is Simon Martyn, a 54-year old Agribusiness Manager from Cheshire who was offered the opportunity to ride Alpe d’Huez in a fundraising event.

Simon began regular cycling aged 50 when he bought his first ‘proper’ road bike, but readily conceded he was “miles off being a super-fit club cyclist”.

“When my colleague suggested Alpe d’Huez”, said Simon, “I was up for it, but had never done a mountain.” With a busy job, he trained as best he could around Cheshire’s modest hills.

“I was not that confident when I got there”, he admitted, “but once I started, I was pleasantly surprised. The first part is pretty steep, but with a bit of adrenaline, it was OK. It was very satisfying to complete the climb, and to know it was not as hard as I had feared.” 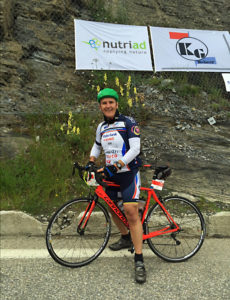 Simon, after his 100% human-powered ascent of the 21 hairpins of Alpe d’huez

Eager to see what the fuss was about, I rented an e-fatbike from Mountain Spirit and set off up trails previously ridden on a conventional bike, so I could make a comparison. The fun factor really shone out, and I could pedal comfortably up very steep trails I would otherwise have walked.

The e-bike clearly did not require anything like as much effort. This was especially true on steeper ground, when I would normally be pushing my heart and lungs to make that extra effort, burning calories and getting that fitness bonus.

So, what does research tell us about the health benefits of e-bikes?

Several small studies of volunteers comparing the same routes on e-bikes and conventional bikes show lower but still significant physical effort for e-bikes, around 3-5 times the basal metabolic rate compared to 5-7 or more with a normal bike.

The real question, however, lies with the benefits when riding e-bikes in ‘natural’ conditions? The answer is not so clear, partly as e-bike users differ in health and lifestyle characteristics from those choosing conventional bikes, and very few studies have observed what happens when people change activities. One that did so found that while those adopting conventional cycling lost weight, those using e-bikes did not.

Riding a climb like Alpe d’Huez on a conventional bike can change perspectives and did for Simon. “Having done this”, he reflected, “I would not be phased by Mt Ventoux (Provence), or the Sa Calobra (Mallorca), so long as I have done some training in advance”. 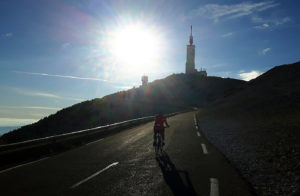 Heading for the summit of Mt Ventoux on the Malaucene ascent; like the more famous Tour de France climb from Bedoin, this route also climbs 1600 metres over 26 km.

E-bikes in the mountains are here to stay. They are great fun, provide valuable local rental income, and open up opportunities for both confirmed riders and casual visitors.

But, with the current surge in their popularity, unfounded assumptions that discourage taking on the challenges of conventional cycling may result in many people losing out in terms of fitness, confidence and sense of achievement. Sometimes, the easy option is not the most rewarding one.

Information on the Alpe d’Huez climb by bike: https://www.climbbybike.com/climb.asp?Col=Alpe-dHuez&qryMountainID=5

Newspaper and magazine articles referred to in this feature:

Research studies contributing evidence on the health benefits of e-bikes