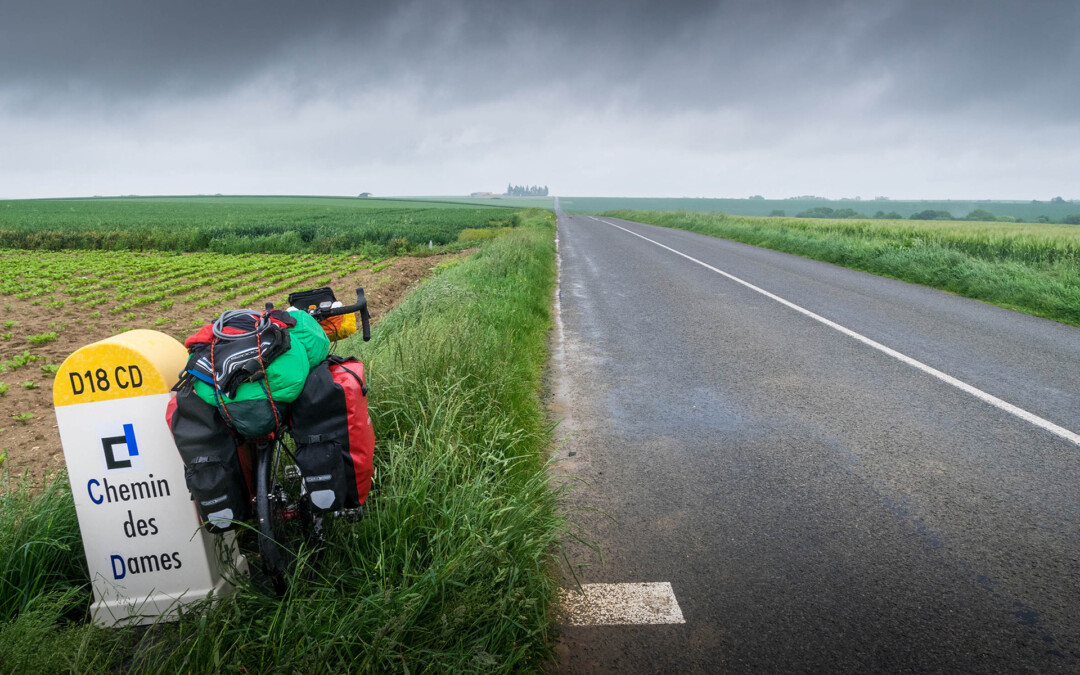 On the wall of a modest café in Montmartre, a plaque marks what could lay claim to being among the most consequential events of the early 20th Century. It states, simply: 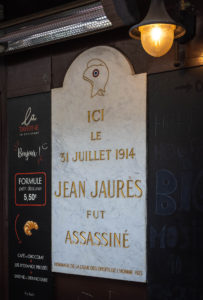 By firing his shots through the window of the Taverne du Croissant where Jaurès, the Socialist leader, was dining with colleagues, the young nationalist Raoul Villain ended French efforts to avoid war with Germany. 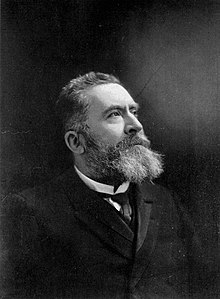 The assassin had a second pistol with him, intended for Joseph Caillaux, the former Prime Minister who, if events of the previous few months had played out differently, might have formed a government with Jaurès and wrested control of foreign policy from the nationalist President Raymond Poincaré.

I had been cycling down the Aisne valley on Day-8 of a 1,500 km ride along WW1’s Western Front from the Belgian coast to the Swiss border.

After Ypres, Passchendaele and The Somme, I was searching for places described in the memoirs of Amédée Tardieu, my wife’s French grandfather and an artillery officer, and his brother Edmond’s grave.

Earlier that day I had visited the Fort de Condé, a few kilometres east of Soissons, and learned about the Séré de Rivières defence system built in response to the disaster of the Franco-Prussian war of 1870-71 and the resulting inclusion of Alsace and parts of Lorraine in the new German Empire. Here I spent time learning about the causes, course and consequences of that war, and of the desire within parts of the French nation leading up to 1914 for revenge against Germany to regain Alsace and Lorraine. 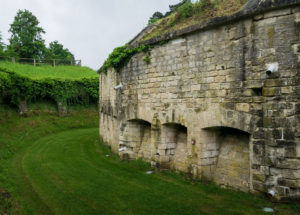 The Fort de Condé, part of the defensive system built in the late 19th Century in the wake of the Franco-Prussian War

Chief among those pushing a belligerent agenda was the French President, Raymond Poincaré, born in Lorraine, and in the run-up to the outbreak of war seeking to strengthen the increasingly militarised Franco-Russian Alliance. Jaurès, the leading socialist and pacifist of his time, could see clearly how the nationalist’s agenda and military preparation were stoking tensions with a Germany that felt itself encircled.

It was in this spirit of eager anticipation to learn more that I cycled into the village of Soupir where I knew Amédée Tardieu had fought in the Battle of the Aisne. The most rewarding travel yields unexpected discoveries, and among the ruins of the once grand Château de Soupir, I struck gold. 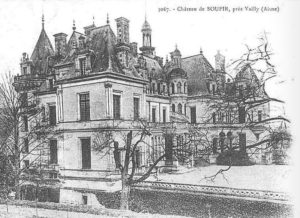 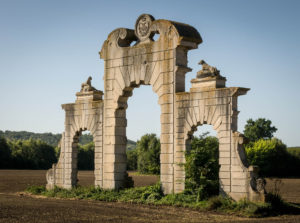 The triumphal arch at Soupir, built by Marie Boursin in 1908 and all that remains of the Chateau

Browsing the information panels, names, places and events leaped out and connected with my reading. A remarkable story of scandal and intrigue at the heart of the French establishment was unfolding.

Here at Soupir, during La Belle Époque, the mysterious owner Mary Boursin had entertained the rich and famous. Born Marie Georget in 1849 into a poor family from Tours, she went to Paris as a young woman and changed her name. There she found wealth through a relationship with Alfred Chauchard, founder of the Magasin du Louvre department store and close friend of Gaston Calmette, Editor of Le Figaro, France’s leading conservative newspaper.

With elections due in early 1914, the Right feared the growing alliance between Radical Party leader Joseph Caillaux and Jaurès. So, Calmette had been busy discrediting Caillaux’s political reputation in Le Figaro.

Caillaux’s second wife, Henriette, with whom he had had an earlier affair, feared that Calmette might also publish their love letters. Mme Caillaux took matters into her own hands, literally. On 16th March 1914, she walked into Calmette’s office at Le Figaro and killed him with six shots from a pistol. 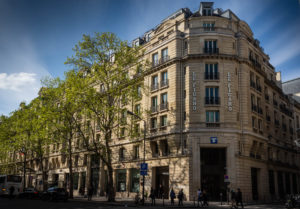 The editorial offices of Le Figaro in Boulevard Haussmann, Paris

Unsurprisingly, the murder set Paris alight, so much so that when an archduke was assassinated in Sarajevo in June, few acknowledged the significance. Jaurès, however, did notice. He vociferously and eloquently campaigned for peace and spoke out strongly in the French Parliament against funding a proposed Poincaré mission to St Petersburg.

The political left triumphed in the elections, and Caillaux should have formed the next government with Jaurès as Foreign Minister.

Together, the two men planned a policy for European peace through rapprochement with Germany. Jaurès, who spoke alongside German Social Democrat leader Hugo Haase at the July 1914 meeting of the Socialist International in Brussels, argued for strikes to prevent the war he saw coming.

With the murder trial ongoing, however, all Joseph Caillaux could do was form a shadow cabinet and await the outcome.

Meanwhile, Poincaré and the hawks at the Foreign Ministry, the Quai d’Orsay, continued to press the case for extending conscription, the ‘Three Year Law’, and readying the country for war. A compliant René Viviani accepted the President’s invitation to form a government if he dropped his opposition to this law. This is exactly what Viviani did, and he formed a government on 17th June 1914; Poincaré was in control. 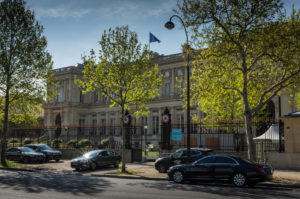 The Ministry for Foreign Affairs, Paris, commonly referred to as the ‘Quai d’Orsay’

In mid-July, Poincaré set off for St Petersburg where – it is understood – he gave Russia’s leadership unconditional assurance of France’s military support in the event of confrontation with Austria-Hungary and – by virtue of Berlin’s infamous ‘blank cheque’ – with Germany.

This other ‘blank cheque’, given by Poincare’s administration, is barely acknowledged. Yet, Russia was the first Great Power to mobilise, several days before Kaiser Wilhelm ordered mobilisation of Germany’s forces.

Henriette Caillaux was acquitted on 28th July, but by the 31st Jaurès was dead. Gone was any hope of rapprochement with Germany. 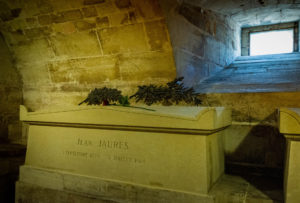 And, as a measure of the significance of these events, William Goldberg, in his detailed 1963 biography of Jaurès, reports that after the assassination even René Viviani spoke of how ‘Jaurès struggled for noble causes, yet peace, the greatest of those causes, died with him’.

In July 1914: Countdown to War, historian Sean McMeekin considers alternative outcomes. Whether or not Caillaux and Jaurès could have ‘jettisoned the Franco-Russian Alliance in favour of détente with Germany’, he wrote, ‘their tussle with the President would have lit up the political skies’.

Back in Soupir, in the shadow of Mary Boursin’s arch, I recalled a passage from Amédée Tardieu’s memoirs which describe him and his fellow officer riding on horseback through a field of poppies near Soupir: ‘when we cross the moor, in the middle of that ocean of tall red flowers, we look like two armed justices, swimming in blood.’ 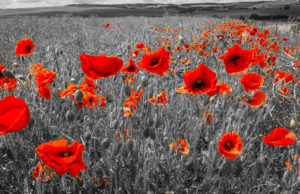 Leaving Soupir, I found Edmond Tardieu’s grave in the French military cemetery of Oeuilly that looks out over the gentle, leafy bowl of the Aisne Valley, then cycled up onto the Chemin des Dames where he was killed near the Fort de Malmaison on 23rd October 1917, aged 24. Yet another poppy. 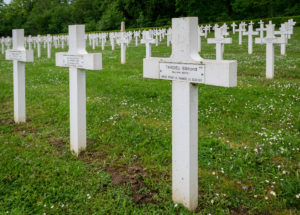 My journey would take me on, west to Reims and Verdun, then south and east through Lorraine and Alsace which by 1914 had become such a source of Franco-German resentment and one factor that made it easier for nationalist leaders such as Raymond Poincaré to argue their case of war readiness in 1914.

Leaving the rolling hills and pastures of southern Lorraine, I cycled into the more mountainous lands of Alsace, up the Col de Bonhomme on the road to Colmar, then took the ‘Route des Cretes’ military road that runs south along the crest of the Vosges mountains. The previous evening, a ferocious storm had swept in from the southwest. Cold, alone and frightened, fighting to keep my heavily-laden bike upright in winds that howled across the ridge, I began to appreciate – perhaps just a little – the awful conditions endured by soldiers fighting in this section of the Western Front at Le Linge and Hartmannswillerkopf.

Like the Chemin des Dames and Verdun, these are among the many battles that saw terribly brutal fighting and the use of gas, yet, are almost unknown to a British public whose attention has been directed at Passchendaele and The Somme.

My ride ended in the woods of Kilometre Zero, where the fighting on the Western Front just stopped by a bridge over a small stream that meandered along the Franco-Swiss border. It was a surreal end to nearly three weeks immersed in the destruction, loss and reconciliation of the Great War, or at least the western European part of it. 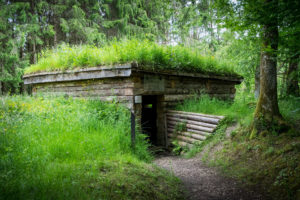 A Swiss Army checkpoint on the border at Kilometre Zero – it was made from timber and earth, as here the soldiers only needed protection from stray bullets

I had so much now to reflect on, perhaps too much. The discoveries I had made at Soupir, however, have been among the most poignant.

Maybe, just maybe, if Jean Jaurès had lived, his legacy could have been a peace that avoided both world wars of the 20th Century.

Author note: This article forms part of a book in preparation:

The Road of Hope and Sorrow: Cycling the Western Front from The Yser to Kilometre Zero