Magic Rides: 1 – A wild day on the Stiperstones 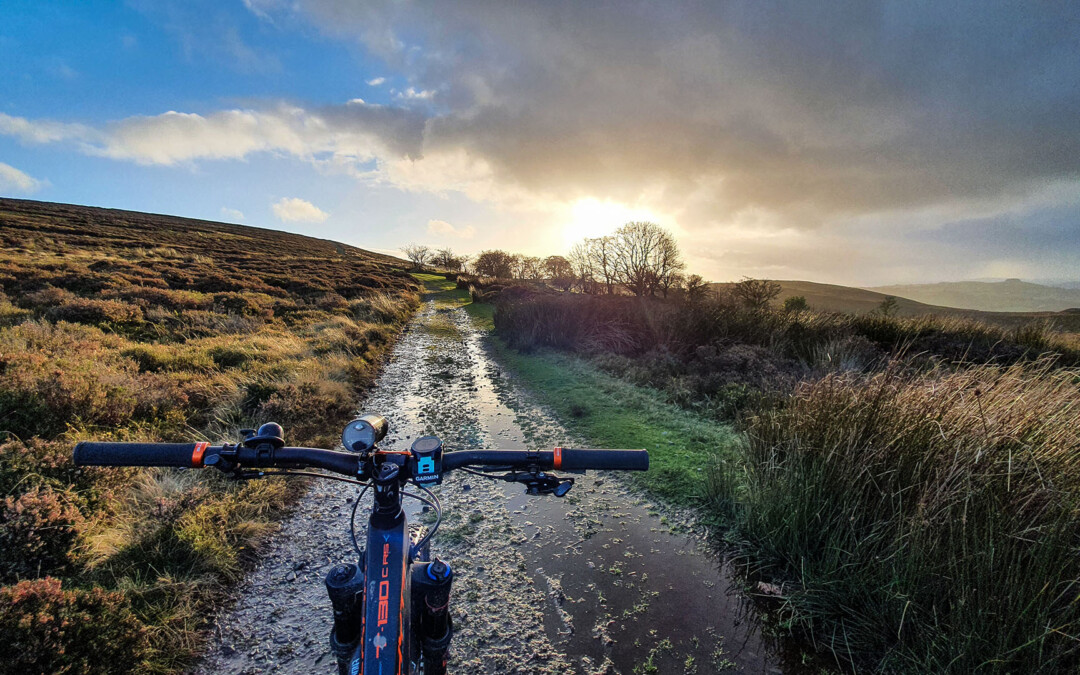 This is the first in my series ‘Magic Rides’, adventures by road or mountain bike that have that special something beyond just the cycling, and which left me with a feeling of wonder and magic. It may be the landscape, beautiful light, a rich variety of wildlife, interesting architecture or fascinating history that cast the spell. In most cases, it will be something of all of these.

The Stiperstones is a beautiful and mysterious place, with a generous share of myths and legends. The most notorious story is that of the Devil who, en route to Ireland, took a rest on the ridge. He was wearing an apron in which he carried rocks with which he intended to fill the nearby valley known as ‘Hell’s Gutter’. As he stood to leave, the apron strings broke, and for whatever reason the Devil left the rocks where they fell. This demonic rock pile is the outcrop now known as the ‘Devil’s Chair’.

And it is said that the Devil returns to his chair on the longest night of the year and summons the evil spirits to join him. Appropriately enough, it was on a very wild Halloween in 2020, that I set out on a this wonderful ride across the Stiperstones on my trusty Whyte T-130 CRS mountain bike.  Brief but ferocious storms were blowing in from the south-west, and the light and views were stunning. 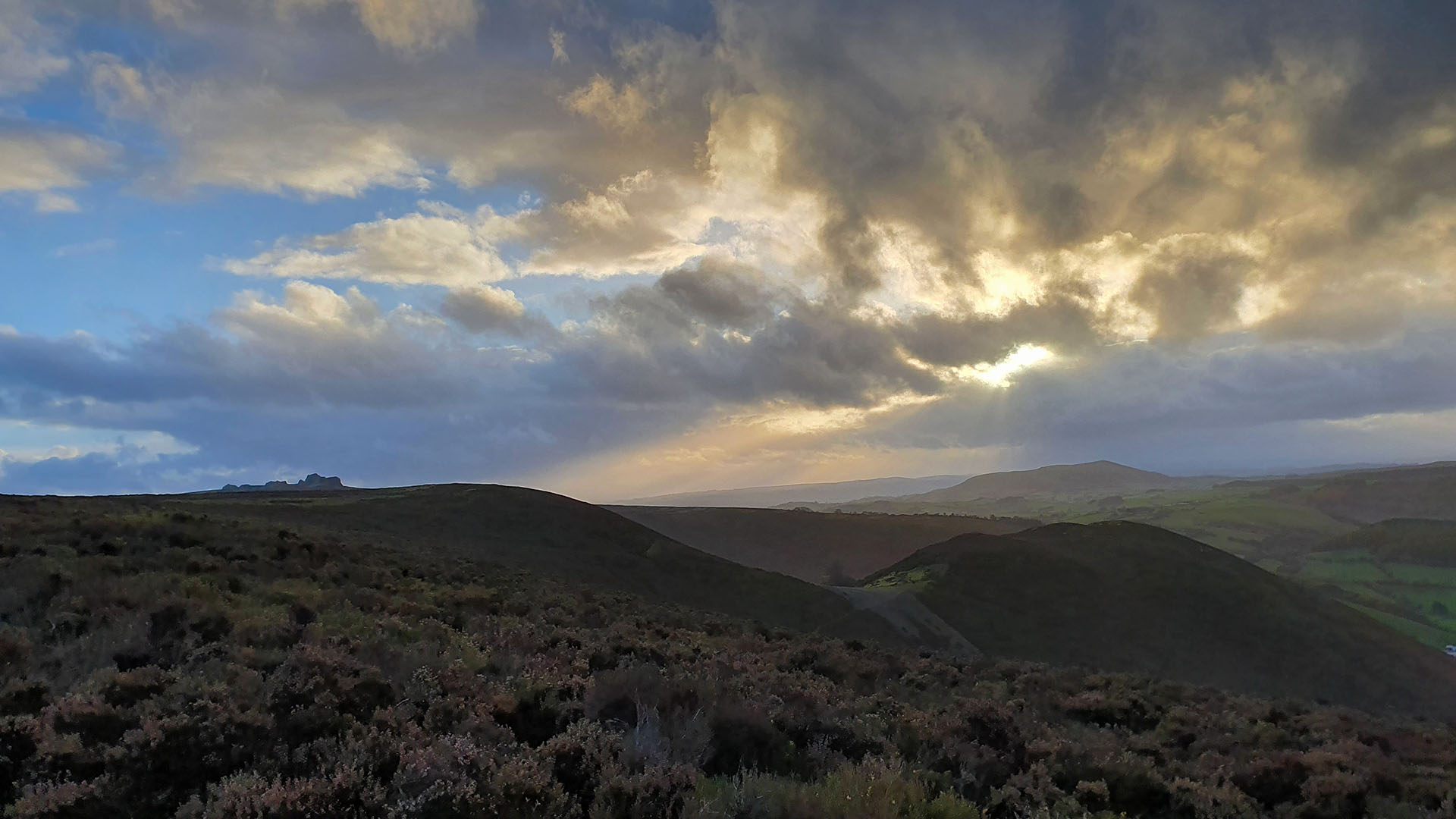 View from near Shepherd’s Rock westwards towards Corndon Hill and Clun Forest beyond, with the Devil’s Chair to the left

So here is a map of my ride. I started from the small village of Pulverbatch, where I was staying in the small, friendly and inexpensive White Horse Inn. I covered a total of 23 km – quite a short ride – with 488 metres of climbing. This took me 2hrs 47 mins riding time, but I was out for about three-and-a-half hours, as I tend to stop quite often to look at my map, take photos and appreciate the views. 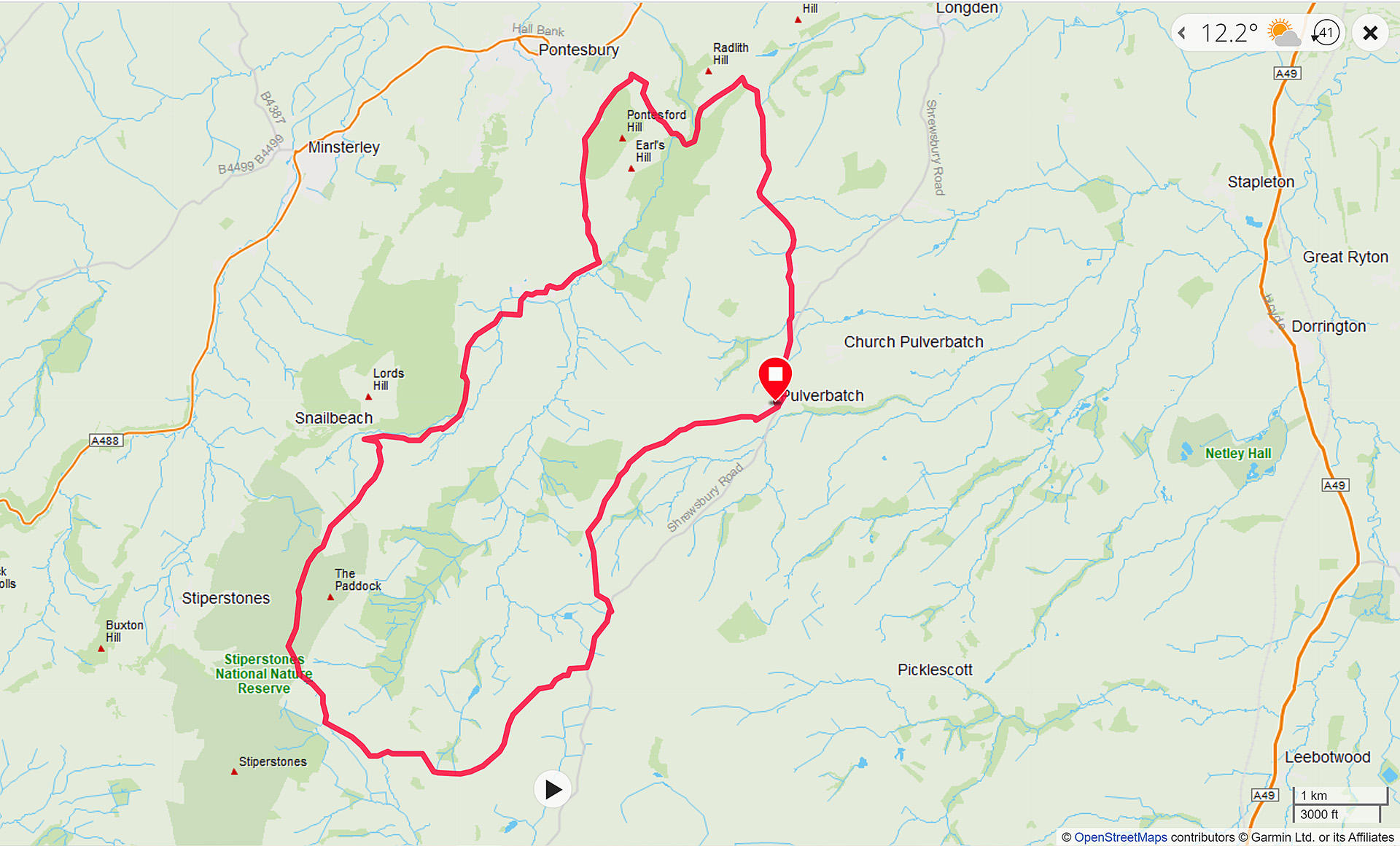 Pulverbatch has the remains of a very interesting castle. It is a Norman ‘Motte and Bailey’ type – nothing unusual in that – but what makes it special is the double bailey (the two enclosed areas), and is one of the best-preserved examples of this type of construction in the country. The information panel provided at the site has a nice illustration by artist Tessa Parker showing how the castle may have looked in its heyday. 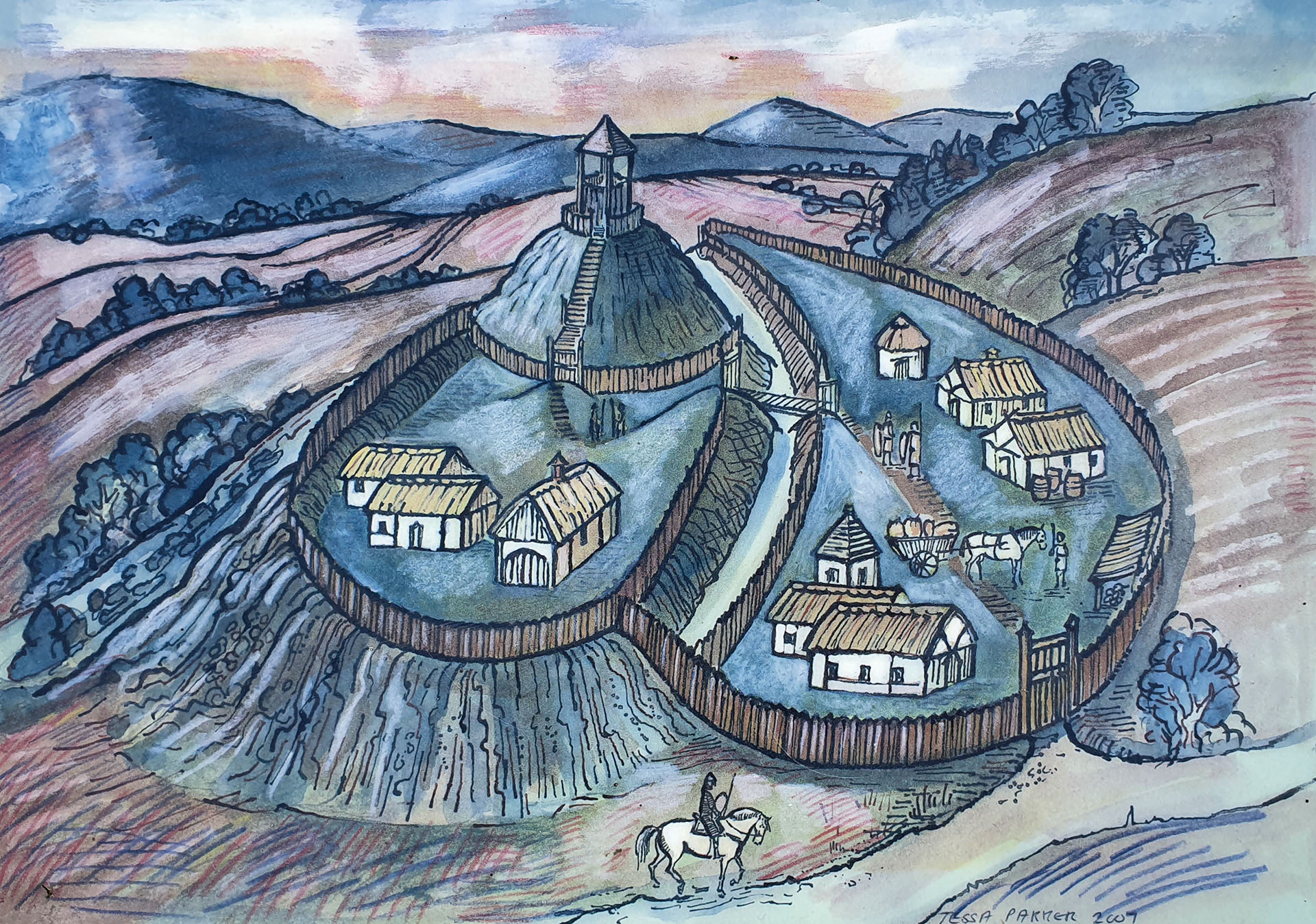 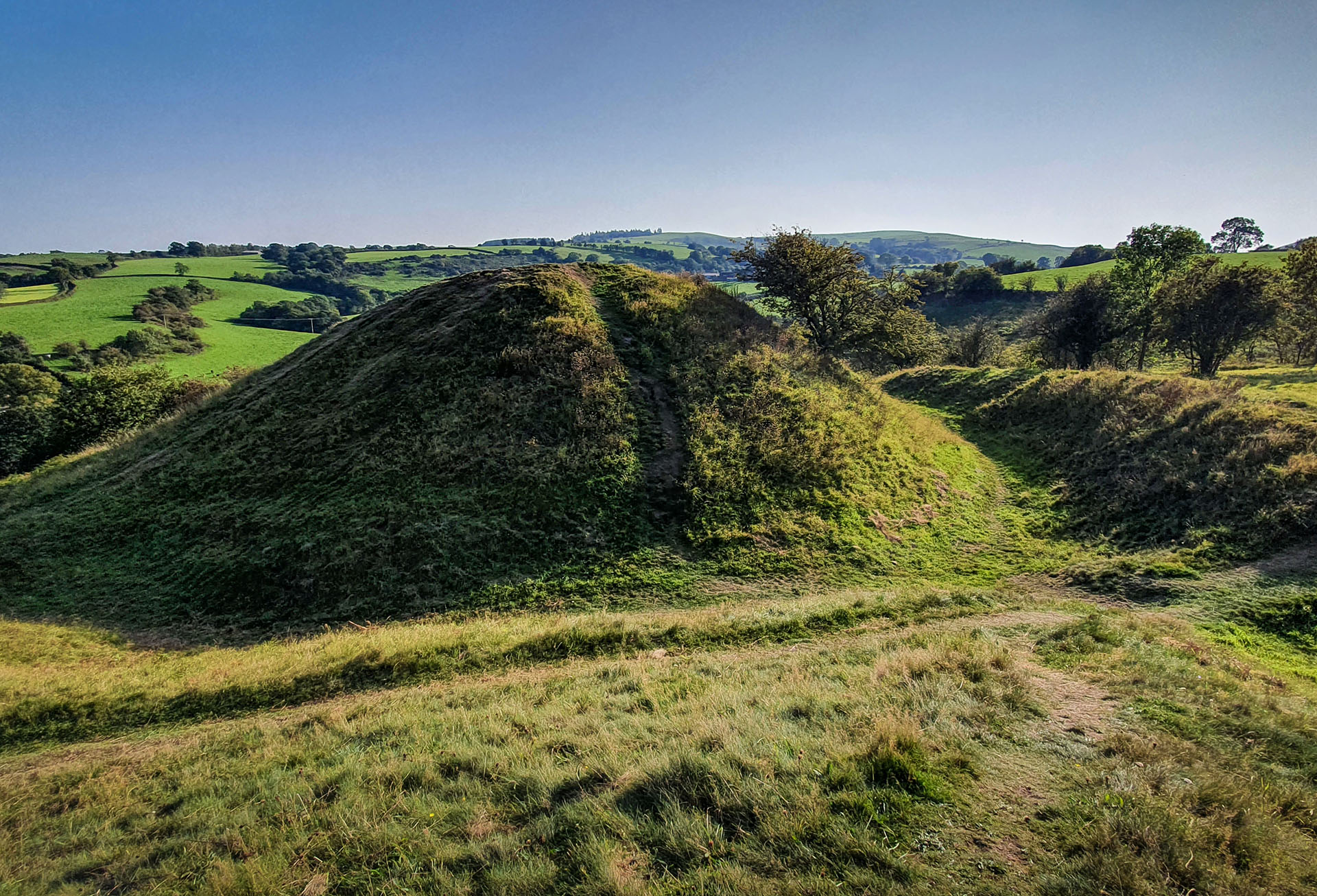 The ‘Motte and Double Bailey’ Norman castle at Pulverbatch, Shropshire

I set off from the village riding north along quiet lanes, and then around the north side of Pontesbury Hill on a bridleway with some really good singletrack leading down to a stream in the woods. Shortly after the village of Habberley, I climbed up to Eastridge Woods, a Forestry England site with two mountain bike trails.

On leaving the woods, the full force of the wind hit me. And so did the gradient of the track that took me, mostly at walking pace (though not walking, I was cycling!) up past Blakemoorgate, and onto the Stiperstones with Shepherd’s Rock to my left. 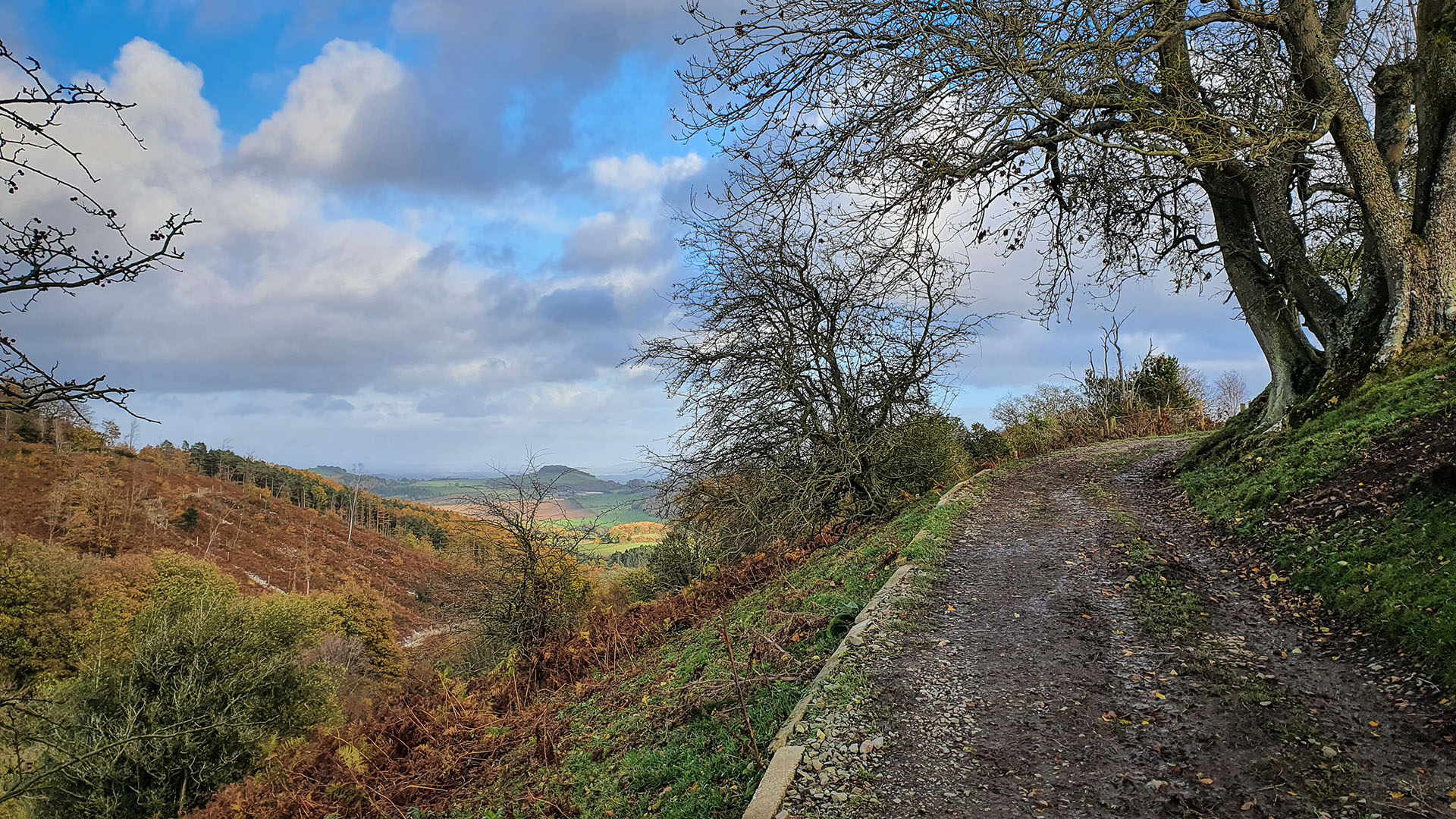 The Stiperstones is a special place: it is a National Nature Reserve, a Site of Special Scientific Interest, and an Area of Outstanding Natural Beauty. The upland heath is mainly covered in heather and bilberries, with red grouse and skylarks, fritillary butterflies and mountain pansies, as just a few examples of the wealth and variety of wildlife. Below the western slopes of the ridge are oak woods, and villages with intriguing names such as Snailbeach, Crowsnest and Stiperstones, that nestle in the steep-sided ‘dingles’.

The geology is interesting. The ridge consists of Ordovician ‘Stiperstones Quartzite’ which was shattered during the last ice-age, so the prominent ‘tors’ such as Nipstone Rock, Cranberry Rock and the Devil’s Chair are surrounded by heaps of scree. 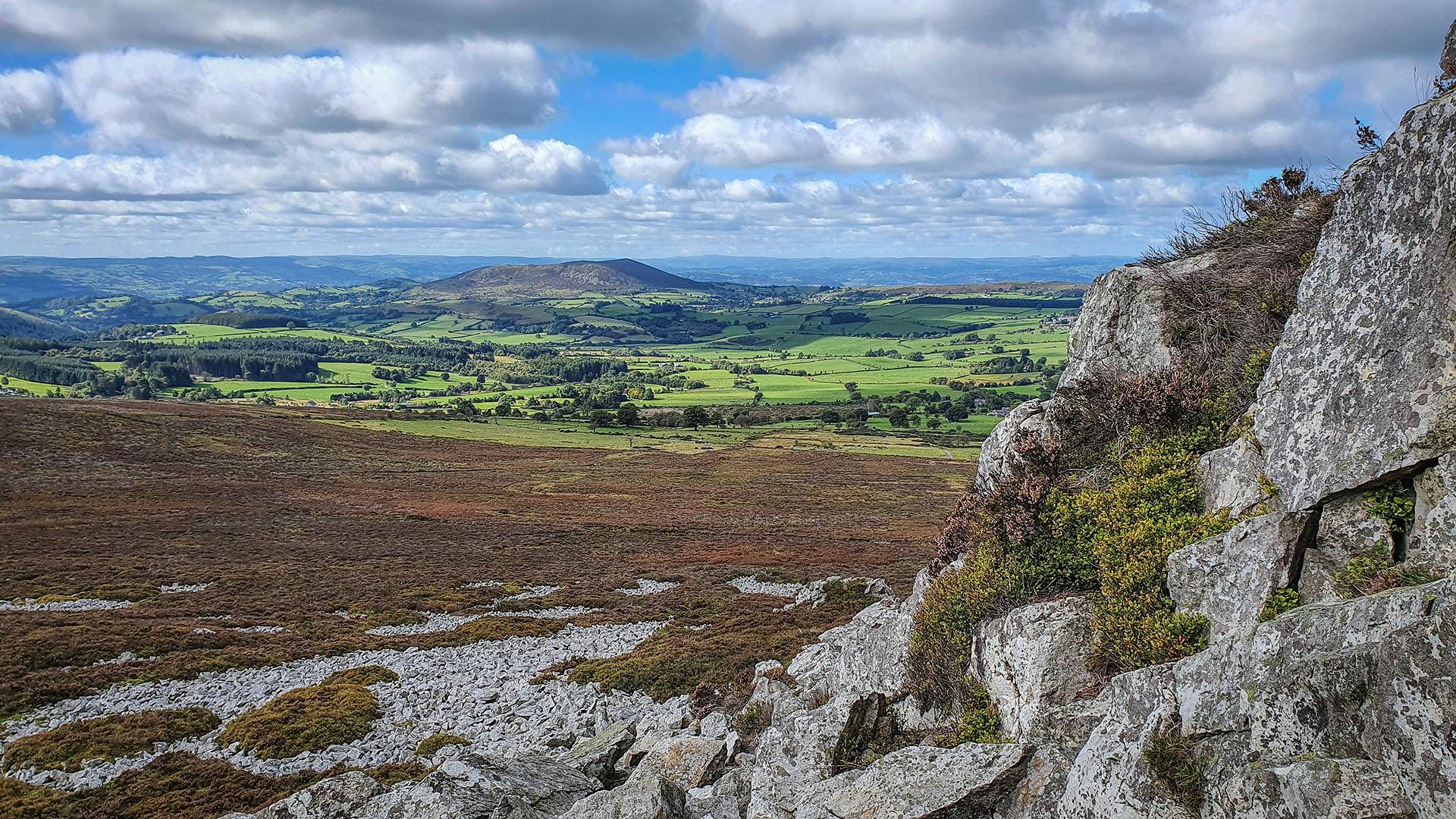 Lead ore deposits have been mined here since Roman times, mainly at Snailbeach and The Bog, where a Visitor Centre explains the history of the area and the mining community that once had an aerial ropeway. On the climb up to the ridge I also passed close to the Lordshill chimney which vented the smelt mill at Snailbeach.

Back on the ridge, I continued to fight the wind, making slow progress past the rocky outcrops scattered along the ridge. There are quite a few options for riding over these hills, whether staying on the ridge or descending via some exciting trails to the valleys. The route past the Devil’s Chair is a footpath, so that is not an option for cycling. On another biking trip here, I turned right at the obvious junction before the Devil’s Chair to take the bridleway to the south-west towards Pennerley and The Bog, which makes for another excellent route. For this ride however, I headed south-east, across a field where a lone bull stood watching me, thankfully disinterested, and past the Hollies Farm.

Now the wind was behind me, and turning left on the road for no more than 100 metres, I took a lonely track to the east that curled around hillsides to New Leasowe Farm, and opened up lovely views towards Pontesbury hill with pretty colours in the now fading light. 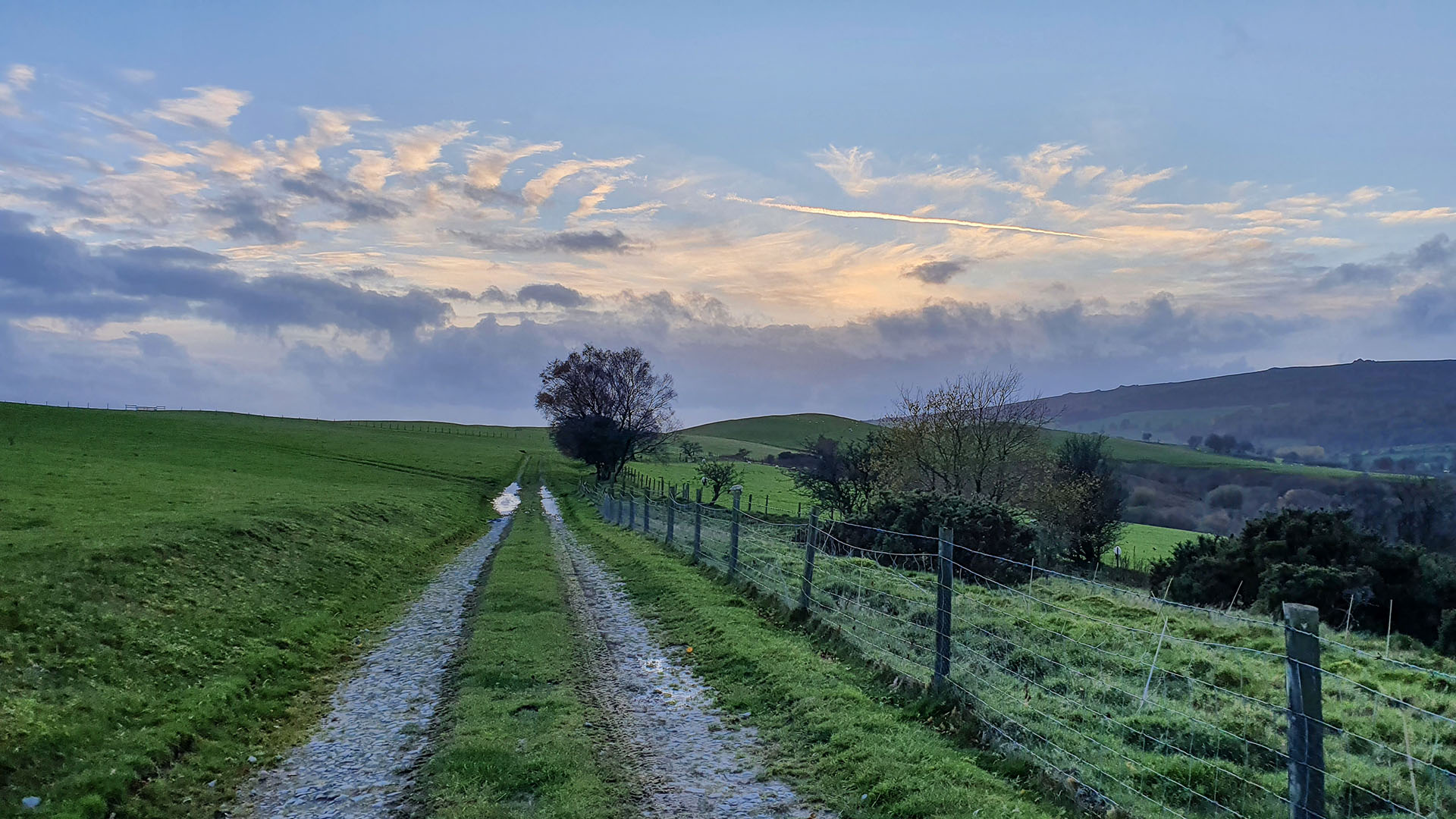 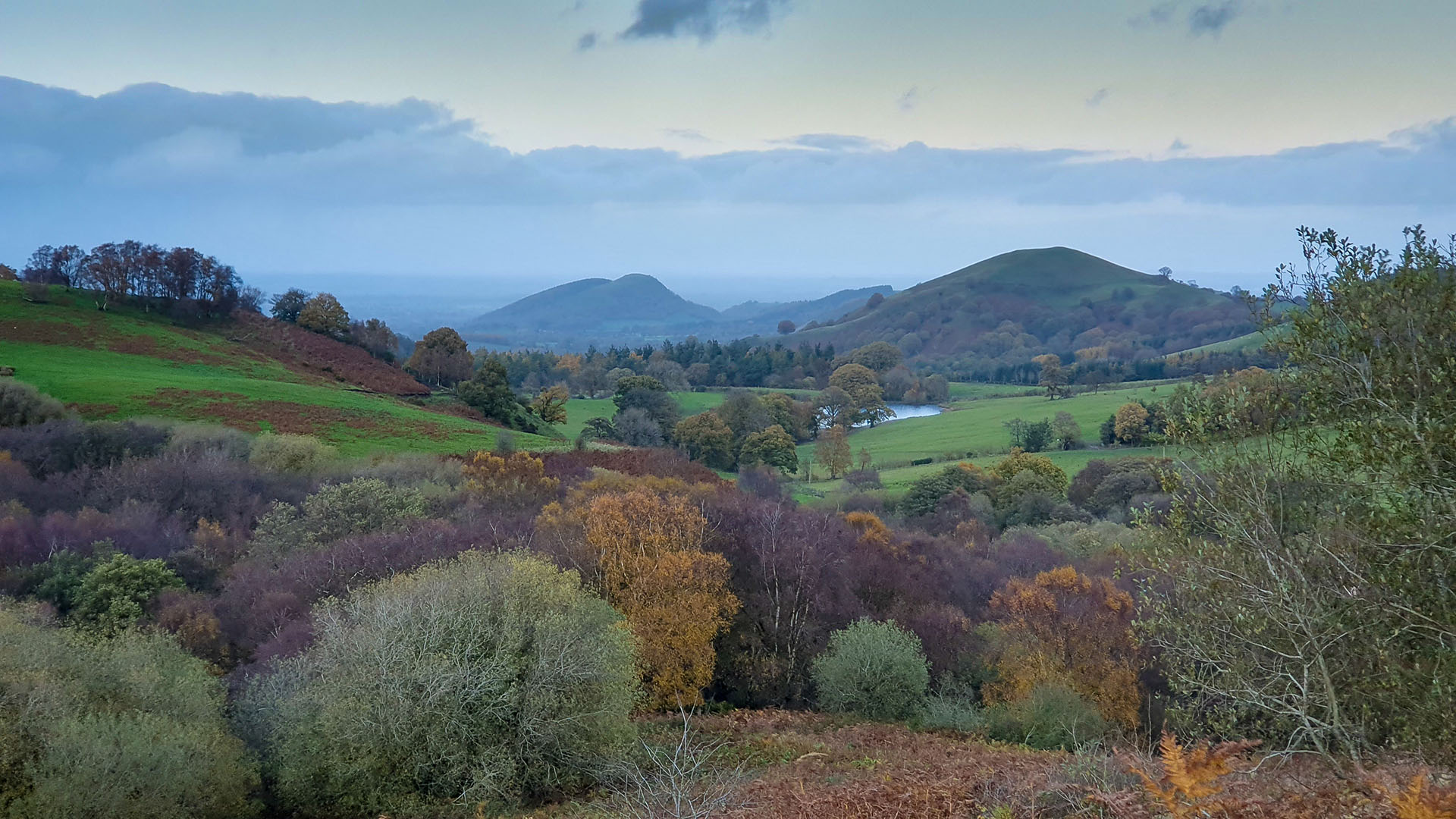 A little way further, on the road back to Pulverbatch, I spotted a small railway wagon beside a ruined structure and being fascinated by industrial archaeology, had to stop and investigate. This turned out to be the remains of Cothercott Mill, which operated into the 1920s drying and then grinding barytes, which was mined nearby. Barytes, I discovered, is an inert mineral (also called Barite, or Barium Sulphate, with the chemical formula BaSO4), that is used for oil and gas drilling, for radiology (barium contrast medium), and as a filler in many other applications. I wondered what it was used for a century ago – maybe the same things. 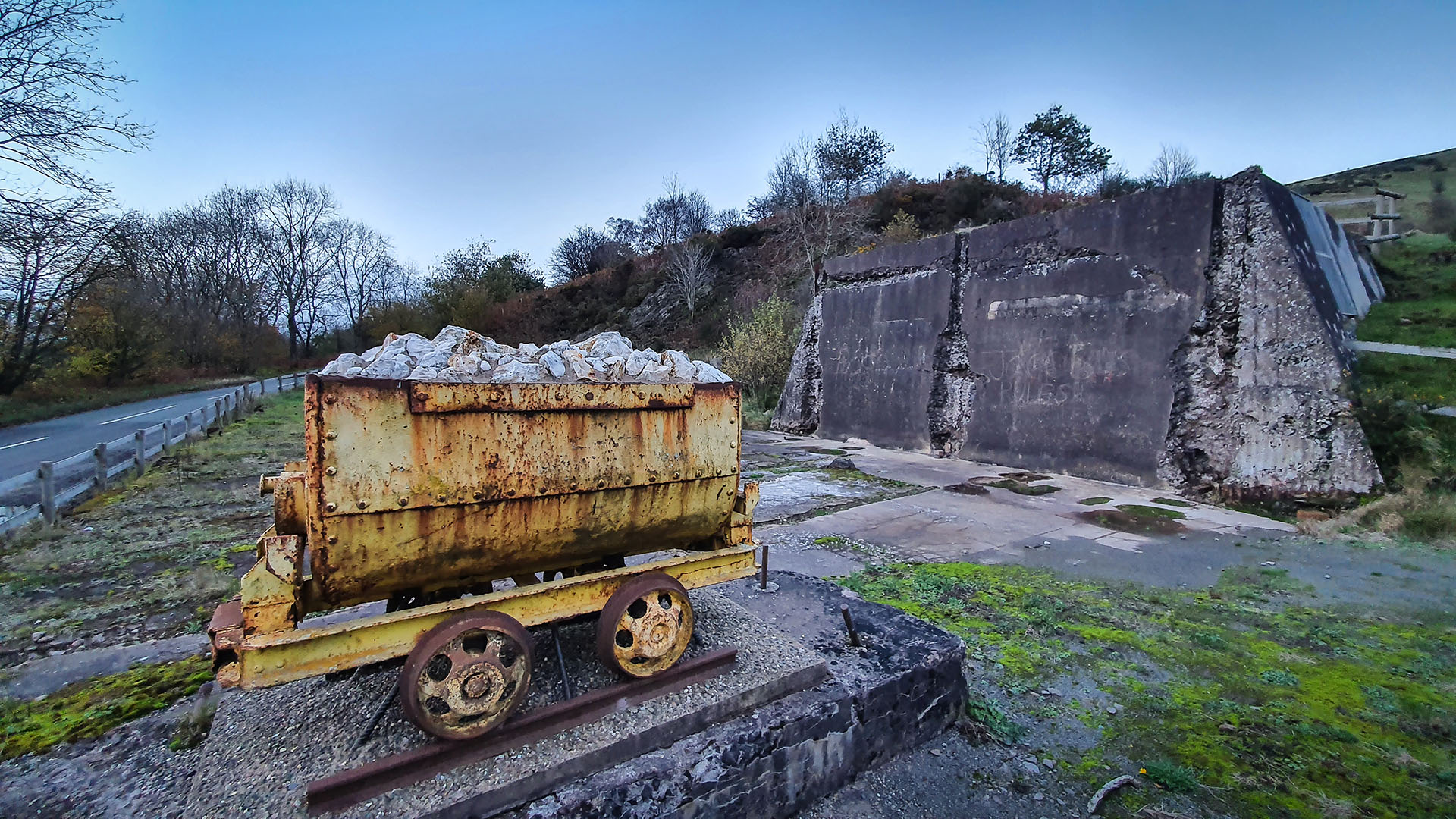 Cothercott Mine and workings, which mined and crushed ‘barytes’ (Barium sulphate) up until the 1920s

Leaving the mine, I set off down a small lane towards Westcott which ran beside the line of the old railway that transported the milled barytes. Before the steep descent into the village, I turned right on a bend to follow a wonderful green lane with old stone walls and high hedges, across Westcott Hill and back towards Pulverbatch. In the gathering dusk, I could sense, like an accompanying spirit, the centuries of history witnessed by this ancient track that brought me back into Pulverbatch beside the castle, a short distance from the White Horse Inn.

In the bar that evening, with my pint of beer and dinner, I thought back over my wild day on the Stiperstones. The magic of the old castle and the legends in the rocks, the wild and stormy wind I fought to gain the ridge, the views across the vastness of these border hills into mid-Wales, the livelihoods dug out of the rocks but now long gone, and the ancient trackways holding stories of those who have passed along them over the centuries since they were first trodden. It is days like this that plant images and memories that will never fade.